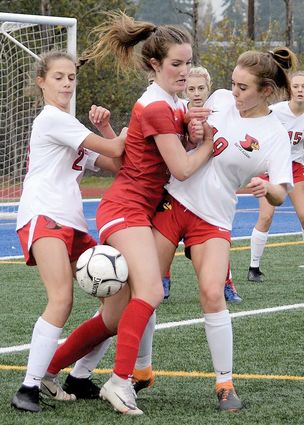 King's had to dig deep.

Missing two key players who were out injured, the Knights fell behind 1-0 to Lakeside (Nine Mile Falls) but then rallied for two goals to pull out a 2-1 victory in the third/fourth place 1A state girls soccer tournament game Saturday, Nov. 23, at Shoreline Stadium.

The victory came less than 24 hours after King's lost a bruising 3-1 contest to eventual state champion Seattle Academy, who edged Cascade (Leavenworth) 1-0 in overtime in the title game.

King's junior forward Olivia Gabelein scored what turned out to be the winning goal. She said that Friday's semifinal l...