Thanks to SanKai, Edmonds is on a roll | Arts & Appetite 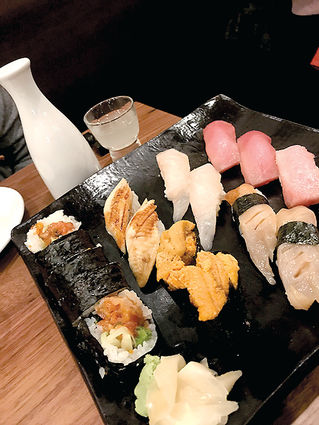 At SanKai: Spicy Tuna Roll, along with two pieces each of nigiri (with rice) of snapper, geoduck, saltwater eel, sea urchin, and two types of tuna – fatty and medium fatty.

Our city's name is on a sushi roll, that is, with the opening of the much-anticipated SanKai Sushi in the Edmonds bowl.

For SanKai, Nakano collaborated with Edmonds' own Shubert Ho and Andrew Lecke (of Bar Dojo, Salt & Iron, The Mar-Ket, Shooby Doo Catering and Dojo to Go).

A friend and I walked in to SanKai on a busy Thursday night and immediately felt both e...