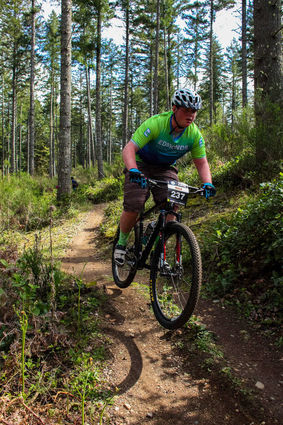 All levels of bikers are accepted for residents in the Mukilteo/Edmonds/Shoreline area. Teams are co-ed with no experience necessary. There are no tryouts and no cuts.

Edmonds-Woodway High School senior Max Pearson has been on the team since seventh grade. Pearson said the club is like any other sports team, where people can create bonds and relationships that last a long time.

Every weekend, the team meets at a trail system to go on group rides. The riders are then divided into groups of five or six people based on skill level. A coach or line leader will take a group for a two-hour ride, Pearson said. This activity is the same for middle schoolers and high schoolers.

Pearson said they sometimes stop on the trail to look at certain features, and coaches will provide tips on how to ride better technically for specific sections on the trail. For the duration of the winter, the team has rides every Saturday morning. During the week, they have optional conditioning practices.

"They're not required by the team to race, but I do them because it's just great conditioning," Pearson said. "Basically you just ride in a loop up and down the hill for an hour. It's not very fun."

The club typically competes in four races per year, each one divided into categories by age and skill level. Pearson races in "intermediate boys," which primarily contains high school racers.

Pearson said he looks toward to racing against people across the state. Competitions conclude with ceremonies and medals for top racers.

"When I joined, I didn't know anyone on the team. It was my first year mountain biking, and I didn't really have any experience or any friends on the team," Pearson said. "My dad just said it would be a fun thing for me to do."

Pearson's sister, Sydney, joined the bike club two years ago. She stayed on the team because of the friendships, support, and sense of community.

"From the first time I tried mountain biking, I loved it," she said. "It's a really fun way to get a workout and see nature. Even though the actual racing is done solo, you're still working to win for your team."