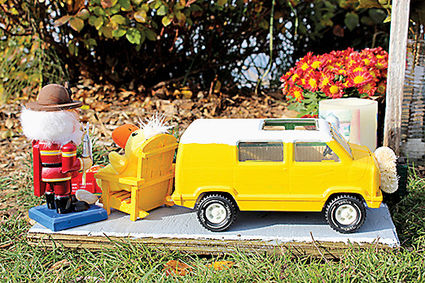 Memorial to Steve Bell on Sunset Avenue in Edmonds.

A memorial to Steve Bell, the yellow van man, is on the Sunset Avenue bluff. The Beacon wrote about Bell, who died last month, in its Oct. 24 issue.

Last week, several of Bell's friends said goodbye where Bell frequently parked his van. Some spoke about how they met and knew Bell.

They scattered his ashes onto rose bushes and walked to Dayton Street, where a tin of his ashes were spread directly onto the tracks. "Afterward, a few of us went to the pub to toast Steve," said Jim Tomlinson.

"It's still hard to believe he isn't going to be there anymore. It's nicer to think that he might be...