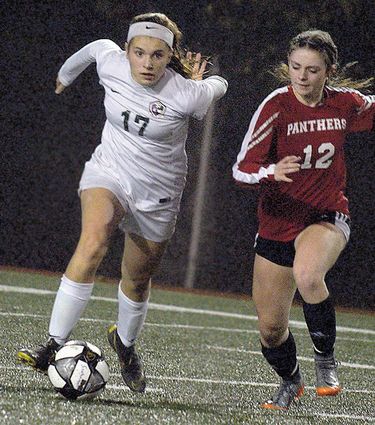 Edmonds-Woodway's Melia Plumis (left) chases after the ball during a 3A District 1 playoff game against Snohomish Saturday, Nov. 9, at Shoreline Stadium.

Edmonds-Woodway came up short in its bid for a third straight trip to the state tournament.

Snohomish shut out the Warriors 2-0 in a winner-to-state/loser-out 3A District 1 tournament game Saturday, Nov. 9, at Shoreline Stadium.

Despite the loss, Edmonds-Woodway coach Bill LeCompte said that the Warriors have a lot to be proud of this season.

"When you look at it and say we graduated half our roster last year and to be come back and be fighting for a state spot, be at the top of the league in a very difficult league, they accomplished quite a bit," he said.

The Warriors finished second in...