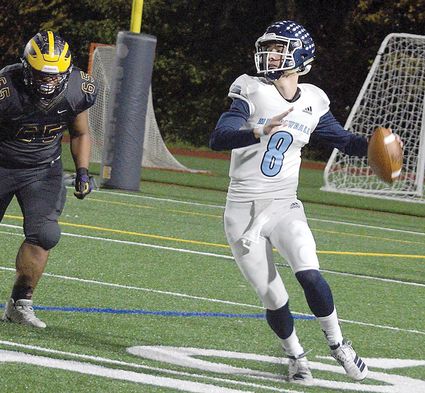 Meadowdale and Bellevue both wanted to establish their running game.

The Wolverines won the battle on both sides of the line with an offense that did not punt the ball the entire night and a defense that largely contained the Mavericks.

Bellevue advanced to the state football playoffs with a 57-21 victory in a week 10 matchup Friday, Nov. 8, at Bellevue High School.

“Throughout the game I think they only had two passes. They’re a running team,” Meadowdale coach James Harmon said. “They did it better than we did. They weren’t physically dominant. They aren’t gigantic. … They play really hard and they execute really well. They’re a well-oiled machine.”

Meadowdale went 4-2 in the Wesco 3A South and finished 5-5 overall.

“I would consider it a successful year,” Harmon said. “The team won more games this year than the last two years. We did not have a losing season for the first time in three years. Obviously, we wanted to win a couple more games. The future is bright. We’ve laid the framework and the groundwork for future Meadowdale football teams.”

Harmon was impressed by the way the Mavericks responded to adversity during the season with schedule changes and weather-related delays.

“There were a few times were our resiliency was tested,” Harmon said. “The kids showed the ability to adapt and overcome.”

The senior class that included Moen, Vaughn, Colton Walsh and Alex Krueger definitely are going to be missed. Moen handled the change from a pass-oriented offense to one more focused on the run well.

This was Vaughn’s second year of playing high school football. He was convinced to come back to the sport by former coach Matt Leonard.

“He is one of hardest workers and it shows,” Harmon said of the senior wide receiver/defensive back. “He’s the kind of athlete you want on your team.”

Harmon said that a different style of program was established this season. Meadowdale is now known as a hard-nosed team that looks to establish the run first.

“From here on out, there’s no question about what we’re about,” Harmon said.