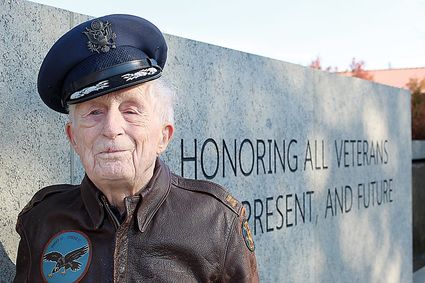 Buck Weaver is a veteran's veteran, a World War II hero, and a proud member of the Greatest Generation.

Yes, that means Buck Weaver has been alive for every Armistice/Veterans Day observance. And, in an interview from his Walnut Street condo on Friday, Buck said he plans to attend Monday's Veterans Day services at Edmonds Veterans Plaza.

"I have always walked with the veterans, but since I turned 101 they're not very enthused about me walking because they're afraid of a collapse," he said.

But odds are Buck will be just fine. He moves nimbly around his condo with his walker, which he pushes off to the side when posing for pictures. He said he's never smoked and only occasionally drinks beer, no doubt consequential to his 101 years on earth.

"I've only met Buck a handful of times, but in those short periods he sets the standard for service above self," said Mike Schindler of Edmonds-based Operation Military Family Cares. "He has always been an active part of any event I've participated in, whether it be the Boots to Books campaign for Edmonds Community College to the hometown parades, he has volunteered.

"He wore the fabric of our nation when it needed him most, he served with honor, and he is what every young adult should look to for an example of what it means to be a selfless leader."

Buck lives on his own, as his wife, Bettina, died three years ago. His has three grown children, two who live in Edmonds – Tim and Ran. Ran (Ruth Ann) checks on her father every day, and assists with groceries or other chores (although you may see Buck walking to the grocery store or bank with the help of his walker).

It was Tim who first arrived in Edmonds. Buck and Bettina moved to Edmonds in 1996 from Horseshoe Bay in Texas, northwest of Austin.

"We immediately fell in love with Edmonds," Buck said. "The scenery, the bay out there. You feel at home here. That's the best way to describe it."

Robert Norman Weaver was born in a Cincinnati suburb on Aug. 17, 1918. He's always been a baseball fan, and was given his nickname after Buck Weaver, one of eight players on the 1919 Chicago "Black Sox" team banned from baseball for life after supposedly throwing the World Series (despite his batting .324 in the eight games).

The Buck Weaver of this story never played in the Major Leagues, but did shag fly balls from center field several years in the 3-I (Illinois, Indiana, Iowa) semipro league.

After high school, in 1938, Buck enlisted in the Ohio National Guard Cavalry, spending three years as a mounted horseman.

But Weaver's plans to become a dentist were placed on hold when it appeared that hostilities in Europe and the Pacific would result in the United States entering the war. In September 1941, he joined the Army Air Corps and reported for primary training at Grider Field in Pine Bluff, Arkansas. A month later, he soloed in the PT-19A trainer.

Upon completion of the primary phase of his pilot training, he was assigned to Goodfellow Field to continue his training. It was while he was in transit to his new assignment that Pearl Harbor was hit and pilot training now took on a new sense of urgency.

His first duty assignment was at Salinas, California, flying anti-submarine missions off the West Coast. He flew the O-47, which was an old fixed wing aircraft, designed as an observation plane. It had a crew of three, and Buck flew these missions for six months.

It was while Buck was stationed at Salinas that he married the love of his life, Bettina. In January 1943, Weaver was transferred to Esler Field in Louisiana to transition into the P-39. The "Airacobra" was one of the principal fighter aircraft in service when the United States entered WWII. He also trained in the P-40, Warhawk.

Training in these two planes also took place in the Mojave Desert, Mississippi, and on the East Coast.

Like the P-39, the Warhawk was a single-seat fighter suitable for ground attack missions. Upon completion of the program in September 1943, Weaver found himself on a troop ship on his way to New Guinea.

It would take 19 days for the ship to arrive at Port Moresby, headquarters for the 5th Air Force.

"It's quite a place," said Weaver. "A tropical island, of course. I had malaria and dengue fever."

Weaver and the other members of the 41st Fighter Squadron would be flying bomber escort, dive bombing, and combat air patrol missions in the South Pacific in support of the island hopping campaign.

Often, Weaver and his fellow pilots would land their planes on hastily constructed landing strips even before the islands were totally under control. Their planes had to be refueled and rearmed for the next day's island hopping mission.

For the next year, Weaver flew 137 combat missions in his beloved P-39 and the P-40. He never crashed.

"I was a damn good pilot," Weaver said, letting loose with a hearty laugh. "I was one lucky guy. I had great aircrafts."

By the time Weaver left the South Pacific in October 1944, he had been promoted to the rank of captain. His next assignment was as the Base Operations Officer at Brooks Field.

A little over a year later, he left the Army Air Corps to return to his pre-dental studies, which were completed that spring. In the fall of 1946, he began dental school at Ohio State University, where he graduated four years later.

Weaver then returned to active duty, giving up his flying status to serve in the Dental Corps.

His first assignment was as a dentist at Keesler Air Force Base in Mississippi. Weaver was no stranger to Keesler AFB, because it was at Keesler that he had taken air-to-air gunnery practice during his pilot training.

For the next 25 years, Buck would serve in a variety of leadership positions as a dental officer and instructor at Air Force bases in the United States, Germany, and Japan, as well at the Air Force Academy, rising to the rank of colonel.

In 1975, after serving on active duty for nearly 30 years, Weaver retired from the Air Force. For the next 20 years, he and his wife, Bettina, lived in Texas.

In addition to pursuing one of his passions, golf, he frequently lectured on various dental topics and was actively involved with the Confederate Air Force.

The couple moved to Edmonds in 1996 to be near their four children and enjoy their grandchildren.

"One of the classist people I know," said Mike Reagan of Edmonds-based Fallen Heroes Project. "He reminds me of a guy from the Bob Hope, Bing Crosby era. Actually, he is one of those guys. Seeing him enter the room makes the room a better place.

"Have you seen his smile? It's real. So many folks have to fake it, but not Buck. But at the last VFW meeting when he entered, he said he was getting tired. I told him it wasn't time yet. I would love for him to be around for a long time. When it is his time, he will be missed by everyone."

Buck Weaver keeps on keeping on. He enjoys life. He makes breakfast every morning: one egg, one or two pieces of bacon, toast, and coffee. He has many memories – of his flying, his wife, his dental practice. He has great support from his children. 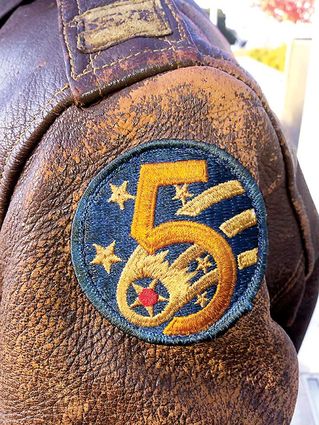 He loves watching "60 Minutes" every Sunday.

And he loves baseball. He watched the recent World Series. He says his favorite memory was his time playing baseball.

"No regrets, but I'm very happy that I didn't have to go into the European war. I was very happy to be in the Pacific during the war. I've loved every place I've ever been to. Every assignment turned out to the best."

As Weaver shuts the door to home, he raises a hand in a wave.

"Come back and visit anytime," he said. "I'm here most days."

– Some background information for this story was written by Fred Apgar and previously published in the Edmonds Beacon.