In Edmonds: Tom Petty, but bluegrass

If you want to hear your favorite Tom Petty songs in a rollicking, acoustic, and jam-band setting, head to the Edmonds Center for the Arts Thursday, Nov. 7, for Keller Williams' PettyGrass Featuring the Hillbenders.

"That's good to print that so people don't expect to hear those, because they won't be played," Williams said. "It's simply because I don't like them."

Williams obliged. "Tom Cruise ruined that for me during 'Jerry McGuire.' I can't get Tom Cruise out of my head when he's screaming and going down the highway all happy."

We get it now.

But there will be plenty of other favorites, as Williams says he'll play about 20 radio hits.

"It's definitely very fun to embark on songs written by Tom Petty that people connect with," said Williams. "And there's so many songs that people forget they know all the words to. It's a really fun project."

Williams, who lives in Virginia, has plenty of them.

Just a few: Grateful Grass, Grateful Gospel, the Keller Williams Kwatro, WMDs. He also plays in a trio, has plenty of solo material, and even once performed shows for kids.

Williams said he pitched the idea for a Petty-inspired show to a few festivals, but didn't receive much positive feedback. He admits that changed after Petty's death in October 2017. "The Hillbenders talked me into doing the project. I had my hesitations, but they persuaded me, and I'm glad they did. It turned out to be a real beautiful celebration of songs."

"It's very much straight-ahead bluegrass that veers to improvisational areas," Williams said. "We've taken liberties with these Tom Petty songs in the form of harmonies. And I'm very proud to be paying tribute to the songs and in a similar tempo, but possibly double timing the music, with high energy, lots of harmonies, lots of really cool solos.

"The Hillbenders are just fantastic musicians and animated on stage. It's a really interesting show to watch, not only to listen and sing along, but to possibly dance to." 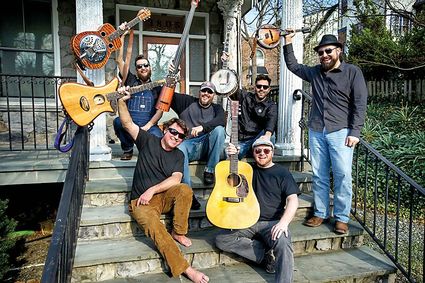 With the use of today's technology, Keller creates samples on the fly in front of the audience, a technique called live phrase sampling or looping, with nothing pre-recorded; the end result often leans toward a hybrid of alternative folk and groovy electronica. It's a genre Keller jokingly calls "acoustic dance music" or "ADM."

"There will be aspects of that, yeah," Williams said. "There's definitely moments in these jams that we play that drift off into improv of some kind. But everything will be danceable and has a backbeat. And when you think of dance music, you take it all the way back to where dance music started. You know, it's the dude on a stump in a barn with a fiddle and a bunch of people just dancing around."

Where: Edmonds Center for the Arts, 410 Fourth Ave. N, Edmonds