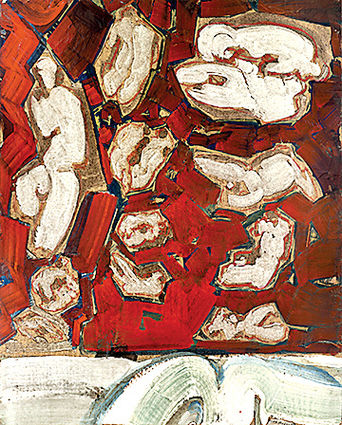 "Fiery Night" by Guy Anderson (1906-1998). This oil on paper is from a private collection, but can be seen at Cascadia Art Museum. Anderson was born and raised in Edmonds and became one of the most celebrated Northwest artists of the 20th century. His paintings rely heavily on nude male figures in dreamlike Northwest landscapes.

Curator David Martin thanked the large crowd of donors, members, guests, and volunteers gathered at the museum on opening night, saying that this exhibition was "something I have wanted to do for a long time, and I am grateful to the board of Cascadia Art Museum for supporting the idea, the first of its kind in the country."

The Museum is exploring regional gay culture through the work of early- to mid-20th century gay...