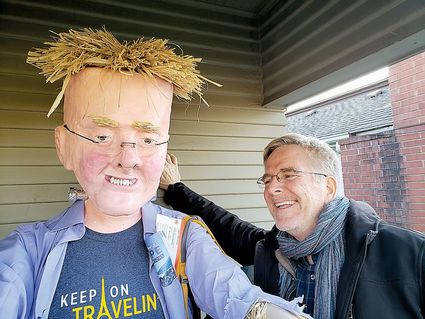 Rick Steves and the scarecrow created in his honor.

Marjie Bowker knew who Rick Steves was, of course. The European travel expert is a celebrity in Edmonds.

Until this week, she had never met him. But after an employee spied Bowker's Steves-inspired scarecrow online, Steves himself paid her a visit.

"My boyfriend and I were having a beer at Claire's, in their back bar because they serve Lucille's on tap, and that's his favorite," said Bowker, a teacher at Scriber Lake High School in Edmonds.

"The bar was recently redone with Edmonds as its theme, and it has references to all of the special places and events in Edmonds in big lettering along the upper walls – and some really cool black-and-white photos.

"When we saw Rick Steves' name among all of those other listings, we laughed. He was especially amused because he's from the East Coast and was very surprised to discover that this is the home of the travel legend."

About a month later, Bowker and her boyfriend considered ideas for her yearly entry in the Edmonds Historical Museum's annual Scarecrow Festival.

"It has to be something about Rick Steves," he said. And then, "Rick FRANKEN-Steves!"

That was this summer.

On Monday, as Bowker was just about to leave for the night, she heard a knock on the door.

"I opened it, and there was Rick Steves! Apparently many people had sent him pictures, so he came over with a colleague to take pictures for their website."

Bowker's scarecrow creation ("Scaring Crows As a Political Act") is one of many posted on the Edmonds Scarecrow Festival voting page at http://www.scf.historicedmonds.org/register-vote/. It's in the residential (single or multifamily/care facilities) category.

The folks at the museum want you to know that If you haven't made your choice in the contest yet, now is the time. The cutoff date is Sunday, Nov. 2.

Winners in all categories will be revealed at the annual Scarecrow Festival reception 7 p.m. Monday, Nov. 4, at the museum, 118 Fifth Avenue N.

In addition to the winners in the six categories, honors will be bestowed on the three "special recognition" winners: top vote getter, best scarecrow by a first-time builder, and best depiction of Edmonds history. 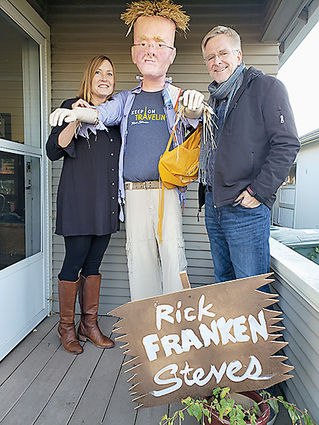 Marjie Bowker on her porch with the two Rick Steveses.

And finally, the reception will include the drawing for this year's Scarecrow Hunt winner. If you haven't entered yet, you still have time. Just find the five downtown-area scarecrows sporting special medallions, and check them off on your official Scarecrow Hunt entry form online or in person at the business displaying the scarecrow or at the museum.

Whether she wins or not, Bowker will no doubt remember the day Rick Steves paid her and her scarecrow a personal visit right on her Dayton Street porch.

What did Steves think of his doppleganger?

"It is an uncanny likeness of me," he told Bowker.

She added: "Right when they were leaving, I noticed a crow right above Rick FRANKEN-Steves' head on my roof. So funny!"

And a little creepy.