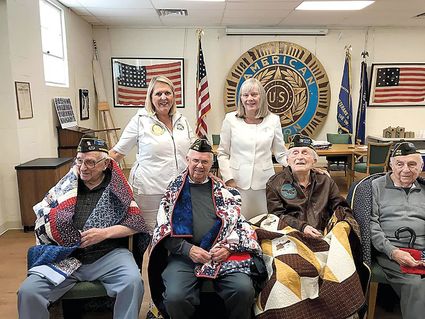 From left: Fred Deidrich, Amos Chapman, Buck Weaver, and Norm Goldstein. These veterans range in age from 96 to 101 years, with Weaver being the senior.

On Saturday, Sept. 21, at the Edmonds American Legion Hall, four World War II veteran members of Edmonds VFW Post 8870 were each awarded an individually designed and personalized Quilt of Honor.

The Quilts of Valor Foundation began in 2003 with a dream, literally. Founder Catherine Roberts' son Nat was deployed in Iraq. According to Catherine:

"I saw a young man sitting on the side of his bed in the middle of the night, hunched over. The permeating feeling was one of utter despair. I could see his war demons clustered around, dragging him down into an emotional gutter.

"Then, as if viewing a movie, I saw him in the next scene wrapped in a quilt. His whole demeanor changed from one of despair to one of hope and well-being. The quilt had made this dramatic change. The message of my dream was: quilts equals healing."