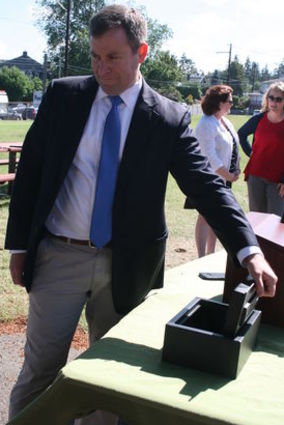 City Councilmember Mike Nelson, a gun owner, showed how he opens his secure lock box at a news conference last year in Edmonds.

On a sunny day on the field of Frances Anderson Center in July 2018, Edmonds City Councilmember Mike Nelson, displaying a lockbox for the media, announced he would submit legislation requiring the safe storage of firearms in the city. Councilmembers approved the ordinance four months later.

Nelson probably knew he faced an uphill battle from the courts and gun-rights supporters. And now, a court ruling has rejected a portion of the ordinance, but allowed another.