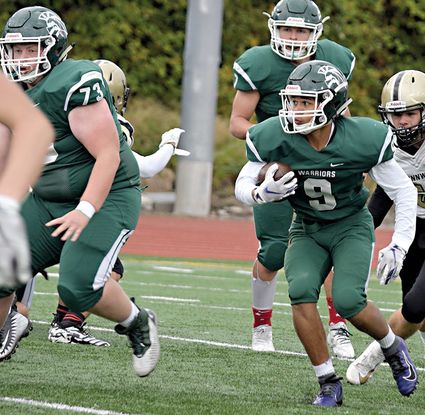 Edmonds-Woodway moved into sole possession of first place in the Wesco 3A South with a hard-fought victory over district rival Lynnwood.

Junior running back Steele Swinton rushed for a career-high 212 yards on 29 carries and scored two touchdowns to help lead the Warriors to a 28-13 victory over the Royals in a Wesco 3A South football game Friday, Oct. 4, at Edmonds Stadium.

Coupled with Shorecrest's 36-35 victory over Snohomish, Friday's victory moved Edmonds-Woodway atop the league standings with a 3-0 record (3-2 overall). Three teams – Shorecrest (3-1), Meadowdale (2-1) and Snohomish (2-1) are chasing the Warriors.

Edmonds-Woodway hosts the Panthers at 8 p.m. Friday, Oct. 11, at Edmonds Stadium. The Warriors have beaten both the Scots and the Mavericks this season.

Before an enthusiastic homecoming crowd, Swinton and the Warriors savored Friday's victory.

"Our pass game is doing good, but we just thought we could get more out of the ground game and now it's clicking," Swinton said. "All the linemen are doing good. All of our running backs are doing good. It just feels great."

Swinton broke his ankle in the third game last year and was out for the rest of the season. So he's especially glad to be healthy and contributing to the team.

"It feels amazing," he said.

Edmonds-Woodway coach John Gradwohl gives Swinton a heavy workload. Swinton returns kickoffs and punts and is the holder on kicks.

Swinton was the beneficiary of an offensive line that played one of its best games of the season.

"I think up front we took a step in the right direction," Gradwohl said. "They were doing a pretty good job of putting some pressure on our run game and it made us work harder."

Carr scored on 1-yard run at the 8:46 mark of the first quarter and Swinton followed with a 13-yard TD run with 48 seconds left in the second quarter to extend the Edmonds-Woodway advantage to 14-0 at halftime.

"I felt like we were moving the ball. They were kind of bend don't break on us," Gradwohl said. "We weren't able to finish, so that (Swinton) touchdown was really important. It gave us a little momentum going into half."

The Royals, however, came out and scored on their first drive of the third quarter, as quarterback Nate Killen tossed a 15-yard touchdown pass to Zack Newson and the lead was sliced to 14-7 with 7:40 left in the third quarter. 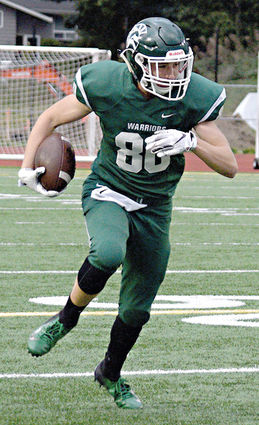 Edmonds-Woodway wide receiver Dillon Rundorff runs with the ball after catching a pass against the Royals.

Edmonds-Woodway responded with a 39-yard scoring run by Swinton and Carr then connected with wide receiver Nate Testfasion on a 36-yard touchdown pass to extend the Warriors' lead to 28-7.

Lynnwood scored its second and final touchdown a 2-yard run by Daniel Tran with just over a minute left in the game.

Gradwohl is always looking for ways for the defense can improve, such as angles of pursuit and better tackling.

But he's pleased with the unit's overall play.

"They're playing great football," Gradwohl said. "We're getting better every week. Every week is a new challenge."

Swinton wants the Warriors to maintain their high level of play.

"I want to keep the same intensity," Swinton said. "We just need to keep grinding away."