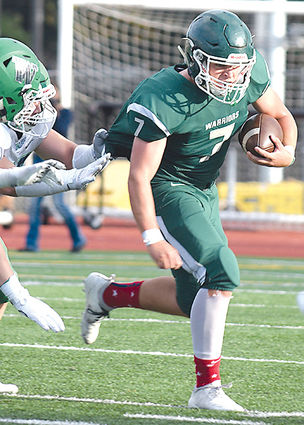 Edmonds-Woodway running back Ben Grimes is pursued by Woodinville during a nonconference game Friday, Sept. 20, at Edmonds Stadium.

Edmonds-Woodway didn’t match up well against Woodinville in the first half of Friday’s nonconference football game.

The Falcons overwhelmed the Warriors, scoring five unanswered touchdowns en route to a 35-7 victory in the Sept. 20 matchup at Edmonds Stadium.

Edmonds-Woodway regrouped at halftime and was able to shut out Woodinville in the second half. The Warriors picked off two passes.

“We did some good things,” Edmonds-Woodway coach John Gradwohl said. “We moved the ball. We did better in the second half. We learned a lot. Our two nonleague opponents were pretty good opponents...