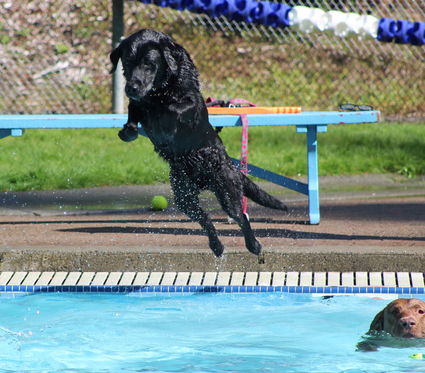 While some dogs gently splashed into the water at Yost Pool, others showed off their style. For more photos than you can shake a stick at, go the Edmonds Beacon's Facebook page.

Anne Shirey, who lives in north Seattle and grew up swimming at Yost Pool, looked on with Ian Conery as Ruston paddled into the water during the inaugural Paws in the Pool.

"I've been at Yost Pool my entire life," she said. "Now it's his time to go into the pool."

Ruston is a 9-year-old German shepherd mix that was hesitant, but ultimately persuaded, to dip his paws in the pool, perhaps encouraged by his canine companions.

Ruston was among about 30 other dogs chasing rubber balls and perfecting their doggie-paddle strokes in the morning session, reserved for dogs 50 pounds and under. Most w...