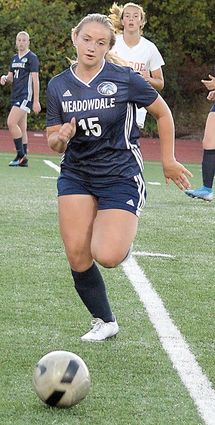 Meadowdale's Kelci Studioso chases after the ball during a game against Monroe.

The Meadowdale girls soccer team is coming together well.

With a revamped roster that includes a new goalkeeper and a different formation, the Mavericks split their first two Wesco 3A games after opening the season with a nonconference loss.

The Mavericks dropped a 3-1 game to Monroe before rebounding to beat Oak Harbor 2-1 in their league opener. Meadowdale then lost 2-0 to Marysville-Getchell.

"We started a new system, a new formation and we had just kind of recently put it in place," Meadowdale coach Michael Nelson said after the season opener. "They came out there and they played it...