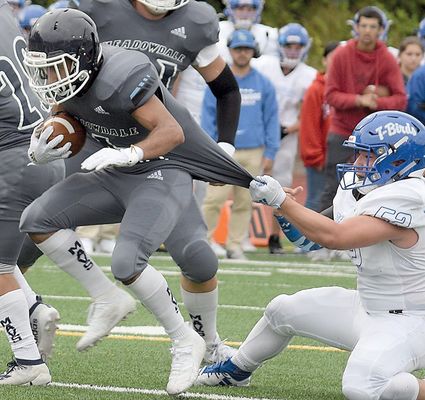 Shorewood's David Fast (right) attempts to slow Meadowdale running back Hussain Al-Mayyahi down by grabbing his jersey during a Wesco 3A South game Friday, Sept. 13, at Edmonds Stadium.

Once the Meadowdale offense got rolling there was no stopping the Mavericks.

Nursing a 13-8 lead early in the third quarter, senior quarterback Hunter Moen and his teammates reeled off four unanswered touchdowns to bury Shorewood 40-8 in the Wesco 3A South football season opener Friday, Sept. 13, at Edmonds Stadium.

"It was important for us to come out here and perform," Meadowdale coach James Harmon said. "We got off to a slow start, but I'm glad we finally started playing right."

The Mavericks (1-0 in the league, 2-0 overall) moved the ball decently in the first half but only had one s...