Meadowdale senior Caleb Monillas hangs on to the the ball during an offensive drill.

The Meadowdale football team hit the ground running on the first day of practices – in more ways than one.

Under first-year head coach James Harmon, who previously was the team's defensive coordinator, the Mavericks picked up right from where they left off after the departure of former head coach Matt Leonard, now an assistant football and wrestling coach in Texas.

Leonard told his players he was leaving in mid-June and Harmon subsequently was designated as the interim coach. Harmon then was named head coach about a month later, after Meadowdale has wrapped up its offseason activities.

Senior lineman Alex Krueger was glad that Harmon, a coach familiar to all of the Mavericks, was selected as the new coach.

"We don't have a lot of time right now. We have two weeks and it's Inglemoor," Krueger said on the first day of practices. "Starting fresh with a new coach right now would been really difficult. So the fact that it's Harmon, a person we've already looked up to, and he knows our strengths and can plan the offense around it, is going to be huge."

Meadowdale hosts the Vikings in both teams' season opener at 8 p.m., Friday, Sept. 6, at Edmonds Stadium.

Harmon was in charge when the Mavericks attended team camp at Evergreen State College where the team worked on a new offensive approach that emphasized the run game.

Harmon wants Meadowdale to be a run-first team, a change from the pass-first oriented offense under Leonard.

While some might wonder about the change given that the offense is led by two-time, all-league quarterback Hunter Moen, Harmon is convinced the new offense will benefit the Mavericks.

"Previously, we would throw the ball to open up our run lanes," Harmon said. "Now we're going to run the ball to give Hunter more of a chance to throw the ball. What I told him is he's going to get less attempts but have hopefully just as many or more yards and touchdowns. It's just not going to be five yards there, three yards there. It'll be big chunks."

"I want to get him in space," Harmon said. "We'll let him make plays on the ground and in the air."

Moen has two elite athletes to throw to in seniors Colton Walsh, a basketball standout, and Mason Vaughn, a first-team, all-league wide receiver and outfielder in baseball.

"It's going to be big," Moen said. "We have Mason on one side. You can't guard both at the same time. If they double up on Mason, Colton is open on the backside."

Another of Harmon's reasons for emphasizing the ground game is the depth and talent in the backfield and on the line.

"We have a number of backs who are going to be good for us," he said. "We have a stout offensive line with a good group of seniors."

The line is anchored by senior Krueger, who earned first-team honors on both offense and defense. He'll be joined by three other seniors to form an experienced unit up front.

Moen has confidence that Krueger and the line will protect him.

"Alex, he brings the O-line together as one," Moen said. "Everyone looks to him. ... If they're not sure where to go, they'll just ask him. He knows everything."

Harmon acknowledged that the offense may not be as fully developed in week one given the limited time the players have had at team camp and in practices. 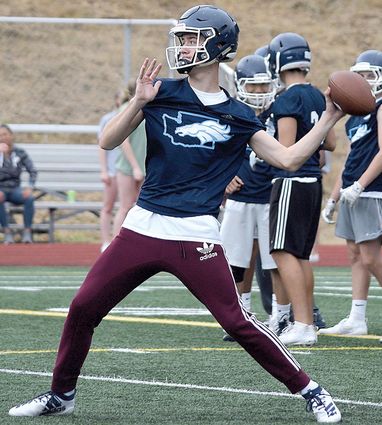 Meadowdale senior Hunter Moen is a two-team, all-league quarterback. B

"I know we're going to be really good at a few things," Harmon added. "There will be some parts of our offense that are still going to be installed. But by the time we play games there's going to be a lot of what we do that is going to be exciting to see on Fridays."

Meadowdale's defense also is seeing a few tweaks under new defensive coordinator Michael Cooke. The Mavericks plan to be more aggressive with their 10 returning starters.

Meadowdale's captains – Krueger, Moen, Vaughn and Monillas – are making quite an impression on their teammates and Harmon.

"Our senior leadership is what excites me the most," Harmon said. "I feel like we've been missing that for a couple of years now and we have a good group and core of seniors who are leading the team."