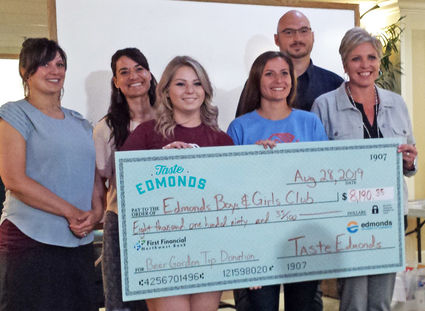 The Edmonds Chamber of Commerce has announced that, thanks to the tips received from attendees at Taste Edmonds, it has donated a record $8,190.35 to the Edmonds Boys & Girls Club. The previous record was $6,630, according to chamber CEO and President Greg Urban.

Donations came from patron tips in the Taste's garden.

Urban presented a check to the Boys & Girls Club during the chamber's networking breakfast at Fairwinds-Brighton Court in Lynnwood.

Individuals, nonprofits and service clubs return year after year to volunteer their time in order to make Taste Edmonds a success, Urban s...