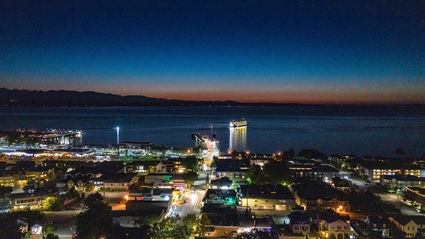 Kaleb Willey took this photo of the Puyallup ferry assisting in the aftermath of a boat collision.

Two recreational boats collided on Monday near the Edmonds ferry dock, sending two people to the hospital for minor injuries, according to Edmonds police.

The Coast Guard reports that one boat with only the driver on board was speeding when it struck another vessel with two people aboard.

According to South County Fire spokeswoman Leslie Hynes, firefighters were dispatched at 8:40 p.m. on the Marine 16, the fire and rescue boat based at the Port of Edmonds. The ferry Puyallup also launched a rescue boat.

Marine 16 located a 14-foot recreational boat dead in the water with two people aboard...