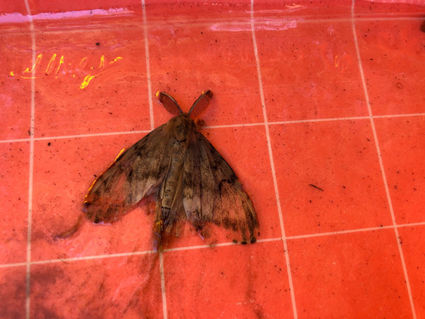 Seasonal trappers from the Washington State Department of Agriculture captured an unwelcome guest last month in the Town of Woodway, Edmonds' verdant neighbor to the south.

What makes this capture particularly newsworthy was that the insect has never before been trapped in the United States – the Hokkaido gypsy moth, a variety of the Asian gypsy moth. The species was confirmed by a U.S. Department of Agriculture laboratory in Massachusetts.

This week, the WSDA also confirmed the catch inside a trap in the southern portion of Woodway.

"We put out about 20,000-30,000 gypsy moth traps every year to detect gypsy moth introductions like this one," said Karla Salp, state Department of Agriculture spokesperson. "People may see more traps in the area, as we have increased the number of traps to catch any others which might be in the area."

Why is the gypsy moth considered an invasive pest?

The European gypsy moth was brought to the United States by an amateur entomologist, Leopold Trouvelot, in the late 1860s in Massachusetts. He hoped to start a silk industry by breeding gypsy moths with the silkworm. Unfortunately, some gypsy moths escaped. No action was taken to eradicate this initial introduction of gypsy moths to U.S. forests.

The European gypsy moth is now permanently established in more than 20 states, with quarantines established as far west as Minnesota.

Multiple detections of Asian gypsy moths have occurred in the U.S. since 1991.

Salp said the gypsy moth is one of the most destructive pests to trees and shrubs ever introduced into the United States, and the department has successfully protected Washington's environment from gypsy moths since the 1970s.

And – bad news here – the Hokkaido gypsy moth has the same flying capabilities and voracious appetite as the Asian gypsy moth, a much nastier version of the European gypsy moth, which is much less destructive.

Oak, apple, hawthorne, poplar, willow, and maple trees would be in danger if gypsy moths establish a foothold in the state, the WSDA reports. But while European gypsy moths almost exclusively consume deciduous trees, Asian gypsy moths – including the Hokkaido – also readily consume evergreen trees, which is of great concern for western Washington.

As such, it is a larger threat to Washington's forests, as defoliation by gypsy moths can weaken trees, making them susceptible to infection by various pathogens.

Washington has had more Asian gypsy moth introductions than any state in the U.S. They arrive as egg masses attached to ships carrying cargo from Asian ports. The Asian and the European gypsy moths are different varieties or sub-species of the same moth (Lymantria dispar). The two varieties look very similar and only through DNA testing can the identity of the Asian variety be confirmed.

The Hokkaido gypsy moth, whose normal habitats are in Japan, Russia, and the Kuril Islands, feeds on both deciduous and coniferous trees, and can fly up to 20 miles. It likely ended up in Woodway after hitching a ride on a cargo ship from the Far East, the USDA reports.

"There is no indication that it will spread to Edmonds at this time," Salp said. "We will be conducting intensive trapping in the area for the next couple of years. We will also review our trapping results this fall and determine where to conduct eradications. This location will be considered in that discussion. Any eradication plans would not take place until next spring."

Trapping continues through September and all the traps should be picked up in October. When complete, WSDA entomologists will review results and, in consultation with national gypsy moth experts, will make a plan for any eradication they think is appropriate.

From there they will create an eradication proposal – which is usually complete in December or January – if they do recommend eradication at any site. Eradications are not planned every year.

"Afterward, the plan would be finalized and spraying, if any, would take place in the spring shortly after gypsy moth caterpillars emerge. The timing depends on the weather. It is usually May, but could be as early as April or as late as June.

"If we do plan an eradication, we offer the ability to sign up for text messages, email, robocalls, or even a Facebook group to stay in the know about the project on an ongoing basis."

This past spring, USDA sprayed a pesticide over 700 acres in the Martha Lake area of south Snohomish County in an attempt to kill Asian gypsy moth caterpillars.

The pesticide, according WSDA, is a naturally occurring soil bacterium known as Btk (Bacillus thuringiensis kurstaki). It is not considered harmful to humans, pets, birds, fish or bees, but is lethal to gypsy moths.

If you see a gypsy moth trap, do not disturb it. If you find a trap that is damaged or has been disturbed, contact the WSDA at [email protected] or 800-443-6684.