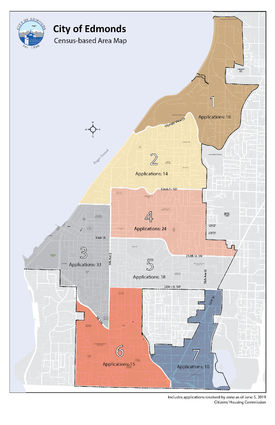 The people spoke, and now 15 of them – out of 135 applicants – have been appointed to Edmonds' new Citizens' Housing Commission.

Members are organized by area into seven zones with roughly equal populations.

The Commission's task is to develop housing policy options for City Council consideration.

It was earlier this year that, after hearing from citizens upset at the direction of the City's draft housing strategy, councilmembers decided to halt the process and look into involving the public and offering more transparency.

Many focused on what they thought the strategy would bring – more density to a city already mostly built out, as well as problems they associated with low-income and formerly homeless residents offered subsidized housing.

So the City hired Berk Consulting to offer ideas.

But after a disastrous public meeting with citizens, who felt their concerns were pooh-poohed by Berk staff, the City cut ties with the consulting firm after spending $90,000 on the Seattle-based company.

Shortly after, Councilmembers Neil Tibbott and Diane Buckshnis presented a proposal to create a new commission with more community involvement.

"One (reason) is to ride on the momentum that has been built during the housing strategy task force, and harness the energy of the citizen involvement and input," Tibbott said. "The second is, through a citizen commission, to narrow the focus of what our housing strategy would look like."

Soon, however, some citizens complained that the City did not distribute adequate notices on past open houses concerning housing issues, even though the open houses were reported by the Beacon and on the City's website.

Due to the concerns, the City sent out notices to every household in Edmonds alerting them to the newly formed Citizens Housing Commission.

The Housing Commission was established by a resolution earlier this year. Under the resolution, the commission is charged with developing, by the end of 2020, "diverse housing policy options for council consideration designed to expand the range of housing (including rental and owned) available in Edmonds – options that are irrespective of age, gender, race, religious affiliation, physical disability or sexual orientation."

The seven districts in Edmonds are based on U.S. Census areas, with roughly equal populations among them. The intent of this approach was to have representation from all parts of the city. This is the first time a district-based approach to commission appointments has been used in Edmonds.

All meetings of the Housing Commission will be open to the public. A date for the first meeting is being determined to allow as many of the new commissioners to attend as possible. The meeting date and place will be announced ahead of time. Monthly meetings will be scheduled after that.

To encourage more opportunities for local involvement, additional public events (such as open houses or town halls) will be scheduled and announced, too. The events will vary in location and occur at least once per quarter.