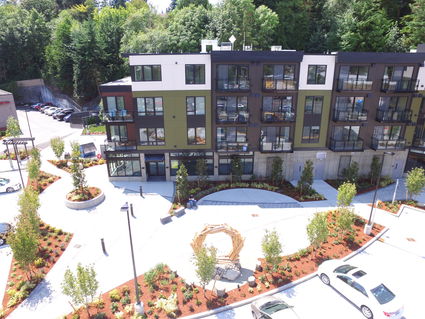 The Village at Westgate has 91 apartments in Edmonds.

The Village at Westgate, a four-story apartment complex at Edmonds Way and 100th Avenue West, has opened as the first in Edmonds to include the multifamily tax exemption program, which means 20 percent of the units are reserved for families or individuals earning 80 to 115 percent of the area's median income.

The apartment has 19 MFTE units, according to a spokesperson on Wednesday. Eleven are leased; eight studios are still available.

The City of Edmonds’ tax exemption program hopes to encourage developers to provide housing in residential targeted areas. It allows the Village at Westgate’s owner, Henbart (an affiliate of Bartell Drugs, owned by the Bartell family), a property tax exemption for the residential portion of the building for up to 12 years as long as designated units remain affordable.

Current availability prices range from $1,330 (with the exemption) for 420 square feet to $2,250 for a one bedroom, one bath, with 675 square feet (no exemption). Numbers may vary according to eligibility.

The tax-exemption program is available in the Westgate mixed-use and Highway 99 areas, the latter part of the City’s plan to transform a 2.2-mile stretch of the road.

The City has had plans for Westgate for some time.

In 2010, the City began working with students from the University of Washington undergraduate Community, Environment and Planning program on design and use of the area.

It aimed to take a look at taking Westgate from a pass-through to a destination location, one that’s walkable.

The Village at Westgate has an indoor lounge and outdoor terrace with seating and barbecue areas. A gaming area, located on the opposite side of the fourth floor, has ping-pong tables and television sets.

The Village at Westgate has a public art piece, “Elementum I,” which Henbart commissioned Western Neon to create. The sculpture is made of reclaimed cedar from Vashon Island, as well as local stone.

The Village at Westgate has electric vehicle charging stations.

The building is managed Northwest Apartments.