An Edmonds park fit for everyone 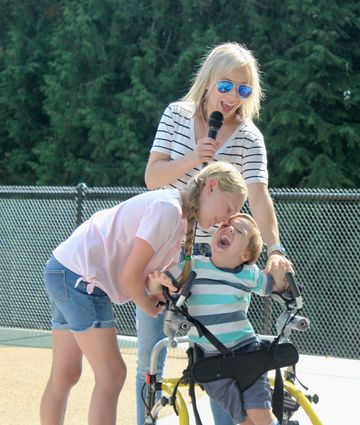 When Edmonds resident Julie Kuehn realized that it was getting more difficult to take her son to the park - Jacob, 4, who has cerebral palsy - she decided to reach out to a councilmember seeking public feedback for Edmonds parks on social media.

“I had been lamenting that we couldn’t come to the park anymore because Jacob is so much bigger, and it’s hard for me to physically get him to each piece of equipment,” Keuhn said. “So I was pretty bummed.”

She decided to reach out to Councilmember Mike Nelson about her family’s experience, and he just ran with it, she said.

“I got all kinds of feedback that our parks aren’t accessible as they should be,” Nelson said.

But when he heard about Kuehn’s experiences taking her children to parks, and how Edmonds parks were no longer accessible for her son, he had an emotional reaction.

The two met and started exchanging ideas and sharing what different communities were doing to make parks more accessible for everyone.

“It was a perfect opportunity, since we were already upgrading Seaview Park,” said Nelson.

Kuehn said one of the most interesting parts of the process was taking Jacob to a city council meeting. Although it was difficult because it was late and hard to have him there, she said it was worth it.

“The impact that seeing him made on the council and the parks department and to see that this would be valuable to the community was really awesome,” she said.

Nelson said the park is for all children.

“It’s not just so much that Jacob can play, but that everybody can play with Jacob,” he said. “Kids need to understand at an early age that they can all be friends together, and that they don’t have to be separated.”

Every part of the park has a purpose, and community feedback was instrumental in the Parks Department’s planning process, Nelson explained. For instance, there are areas in the park where children with sensory overload can take a break.

“We’re almost done, and we’re excited that we were able to invest in this neighborhood and have such a strong community in Seaview to be here to support this,” said former City of Edmonds Parks, Recreation, and Cultural Services Director Carrie Hite.

The difference this park will make for the Kuehn family is clear, but it’s also about how other kids and the broader community will play together.

“The benefit of other kids seeing Jacob is that it’s normalized,” Kuehn said. “He’s just Jacob, and it’s no big deal. Other kids will be able to come here and experience that.”

Kuehn said seeing Seaview Park come to fruition with all of the support from the community, the council, and the mayor, has been surreal. 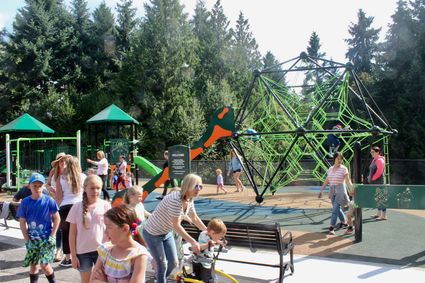 “To see this kind of support and to see the value, not just for Jacob, but for all of the kids, is really heartwarming.”

A few days before the official opening of the park, Jacob and his two sisters, Haylie and Natalie, were on the disc swing for a long time, Kuehn said. They hadn’t been able to do that until now.

“To be a mom with a special needs child, you don’t really know what you’re doing, and then to have so many people support something like this and to see the value of this for the whole community is great,” she said.

“It’s not just for Jacob; it’s for all of these kids and families to enjoy and to be together.”