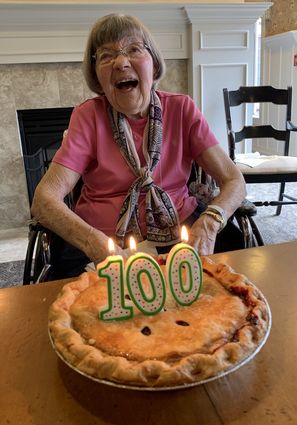 Edmonds has a new centenarian, as Mary Ross turned 100 on July 7 at Edmonds Landing.

Mary, a resident of the Edmonds/Meadowdale area since 1988, was excited to dig into her marionberry pie as she marked the milestone with her daughter, son-in-law, three grandchildren, and their partners and spouses.

Mary grew up in the Los Angeles area and worked as an elementary school secretary for decades until her retirement. She moved to Snohomish County to be close to family.

After moving to Meadowdale in 1988, she was in the Fuller Guild (Seattle Art Museum); a member of the Arboretum, Lake Forest...