By Brian Soergel and Cheryl Aarnio 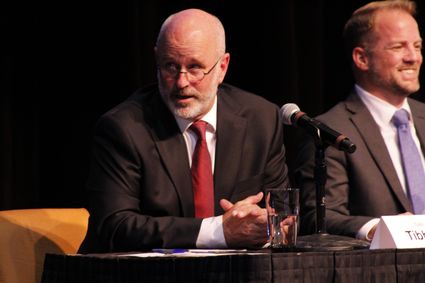 Neil Tibbott, left, and Brad Shipley at the mayoral forum at Edmonds Center for the Arts.

During two mayoral forums over the past week, it became clear that the four candidates for Edmonds’ top job agree on a few salient points: The city needs to communicate better, Highway 99 is a mess, Edmonds’s quaint character needs to be preserved, and homelessness and housing issues need to be addressed.

As expected, the four  City Councilmembers Kristiana Johnson, Mike Nelson, and Neil Tibbott, as well as City planner Brad Shipley  touted their accomplishments and explained why Edmonds citizens ought to tick off their names in the August primary.

It’s political season, so the gloves came off, too, ever so slightly.

No one connected with more jabs than Kristiana Johnson, a veteran in the local political arena who raised more than a few eyebrows when she announced her candidacy. This after breaking her hip on vacation in Hawaii (she now uses a cane), causing her to miss several council meetings this year.

But Johnson, a policy wonk who stressed she is the only candidate with a deep financial management background, raised the two evenings’ biggest buzz when deviating from the inside-baseball back-and-forth.

During the first forum, at Edmonds Center for the Arts, each candidate was offered a chance to ask a question of another candidate.

Johnson asked Tibbott  an ordained minister  if he would perform a marriage ceremony for one of his children if they were gay. Tibbot, momentarily taken aback, said he defines marriage as between a man and a woman, but supports marriage equality.

But he also said he would “invite them to be married by someone else.”

Although the full house at ECA remained quiet, local social media accounts soon lit up with opinions on Tibbott’s declaration. One gay-rights group initially planned to hold a rally before the second forum, Monday night, but later decided to cancel.

It was on Monday, at an event sponsored by Alliance of Citizens for Edmonds (ACE), where Johnson dug in again, saying Tibbott voted to raise the height on Edmonds’ downtown buildings, an always controversial topic.

Tibbot called that a “misrepresentation.” “Never, not even once, have I voted to raise buildings heights downtown. To me, this is like a personal attack.”

Johnson questioned Tibbott on the Edmonds Marsh, which abuts Harbor Square, the latter owned by the Port of Edmonds (which in 2013 saw its attempt to add multistory buildings to the property rejected by councilmembers).

In January 2017, an expert on parliamentary procedure and Robert’s Rules of Order, both of which help to guide Edmonds City Council’s legislative action, determined that three councilmembers  including Tibbott  had improperly tried to influence a decision approved by councilmembers that they opposed on the losing end of a 4-3 vote.

Tibbott and Councilmembers Dave Teitzel and Thomas Mesaros had fired off a letter to Department of Ecology Director Maia Bellon after councilmembers voted in September 2016 to state the city’s preference for a 110-foot buffer and 15-foot setback around the Edmonds Marsh.

The three councilmembers wrote that they supported a 50-foot buffer and 15-foot setback, which both Mayor Dave Earling and the department agreed was the best option.

Johnson brought that up at ECA, and Tibbott said he apologized. “That was something that we didn’t need to do, and I’m sorry that we did it.”

“I’m glad you learned a lesson,” Johnson said, to gasps and laughter from the audience.

Here are selected comments from the two mayoral forums. They are both in full online. The first from ECA on YouTube and the second on the City of Edmonds website.

All four candidates expressed their desire for more public engagement; it’s an issue that Shipley has made central to his campaign. He repeated his call for a full-time, centralized City communications person, someone trained to get information out to citizens.

Nelson brought up the failed Waterfront Connector, and how a grassroots Facebook campaign signed by 15,000 helped sway the council’s vote. He called for “robust” social media outreach and increasing the amount of community meetings.

Johnson said that community meetings need to be held in all areas of the City, not just in the Bowl. “We need to go where people live,” she said.

There was unanimous support for finding affordable housing options, and all candidates agreed that the Edmonds Lutheran Church’s plan for “Blokable” housing, pre-manufactured units that can be stacked on one another, is a good idea. The site would be managed by Compass Housing Alliance, which would screen potential renters.

Tibbott said he has learned the Blokable program has worked in Shoreline, and he’s interested as long as the City doesn’t pay for it.

Tibbott and Shipley both called for regional strategies to combat homelessness. Nelson said that the City’s contract with a social worker, an employee the City shares with Lynnwood, is not working.

Johnson, Nelson, Shipley, and Tibbott all agreed that Highway 99  which dominates the City’s weekly police report  is the top safety concern. That takes up considerable police time, which leaves the rest of the city vulnerable, Nelson said.

“There's prostitution. There's drug use,” Johnson said. “There are things that I can't even begin to tell you about, but I think until we get to the core of the problem and try and close those no-tell motels and try to clean up 99, we're going to have problems.”

The City is now engaged in a long-term plan to clean up and modernize the corridor, which could take years. There is already some progress.

“We're starting to see redevelopment,” Shipley said. “I think once we get redevelopment there and we get people that are paying attention to the street, the crime rate there will improve."

All candidates agree that Edmonds is a desirable place that should maintain its so-called charm.

Shipley said Edmonds is changing, but it’s nothing to be afraid of.

“We have an ability right now to be able to affect the change that we want to see,” he said. “We need to be engaging citizens right now about what we want the future of Edmonds to look like instead of it being determined later on for us.”

Shipley added that there’s housing being built on the outskirts of Edmonds, and those residents will want to visit Edmonds, which means more traffic and more people, but also more business.

Tibbott said the growth that Edmonds will see will be slow, as it has been, so it is something that the city will be able to handle.

“I’m very excited about what's happening in some of our new business zones,” he said.

The candidates recognized that it’s important to find ways for residents to afford homes.

Nelson said the problem is rising property taxes, yet many people have fixed incomes, and many do not qualify for tax relief.

Edmonds could change utility rates, aid in home repairs, or allow people to have a detached mother-in-law unit, he said.

Johnson pointed out that a year ago, she compiled a list of ways seniors can get tax relief, in areas such as property taxes or utilities. 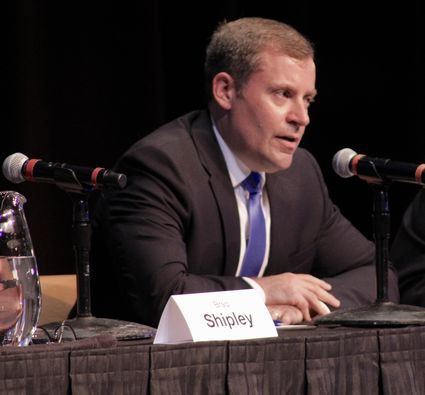 Mike Nelson at the mayoral forum at Edmonds Center for the Arts.

“I think that this is a real problem, and I want to work more to solve it and help the citizens that are having struggles,” she said. “I think that there are lots of opportunities through Homage, our Snohomish County senior services."

Knowing about the ways residents can get tax relief is imperative, Tibbott mentioned, but more housing options are also necessary. He said the senior center also offers meals and clothing assistance.

Alliance of Citizens for Edmonds (ACE) plans to have a candidate forum 6:30-9 p.m. Thursday, Oct. 3, at City Council chambers, 250 Fifth Ave. S., Edmonds. It will feature eight City Council candidates and the two mayoral candidates who advance after the August primary.