All aboard! Free summer trolley coming to Edmonds 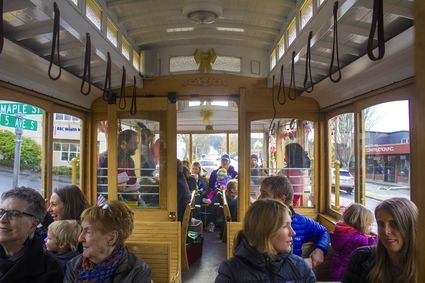 Is it Christmas in August?

Not quite, but Edmonds residents may crane their necks next month as the Edmonds Christmas trolley that cruised downtown streets is transformed into the Edmonds summer trolley.

The story of an Edmonds summer trolley has been years in the making, said Economic Development and Community Services Director Patrick Doherty.

The trolley is the culmination of many years as a wish-list item on the City’s Strategic Action Plan.

But earlier this year, momentum built up as Edmonds Economic Development Commission took up the idea of exploring the possibility of running a trolley service between downtown and waterfront areas as a way of cross-promoting and connecting the city’s two main visitor attractions.

While the free Edmonds holiday trolley has become a seasonal favorite for the community on Saturdays during the winter holiday season in downtown Edmonds, until now there had not been a successful attempt to expand trolley service to other times of the year.

In the past, the holiday trolley has been funded by the Edmonds Downtown Alliance, with sponsorship from Comstock Jewelers, HouseWares, Rick Steves’ Europe, and Walnut Street Coffee.

But the City is exclusively paying for next month’s trolley in a pilot program with Seattle-based Emerald City Trolley, which also provides the holiday trolley.

According to Doherty, that cost is about $1,400 a day, about $7,000 for the five summer days, plus some incidental costs for signage.

“That’s a bit more expensive than the holiday trolley daily cost,” said Doherty, “since summer is peak season and the daily cost is higher.”

The shuttle could help a little with Edmonds’ parking problem on busy days.

“If people park in one place and then take the trolley to go, say, to the waterfront, they don’t have to drive around and search for a new parking place to re-park,” Doherty said. “That helps.”

City Council candidate Alicia Crank, who applauded the concept of a shuttle in a recent letter to the Beacon, agreed.

“My hope is that, if the August trial is successful, that there will be room to expand the line beyond just downtown,” she said. “Ideally, I’d love to see it possibly run along Edmonds Way and/or Main Street and 220th as a next phase.”

An additional stop in front of Walnut Street Coffee will be added for those days when Dayton Street utility work blocks eastbound travel up that street.

“I’m thrilled that the EDC, downtown merchants, Port of Edmonds officials, and others have come together this year to make this August trolley service a reality,” said Doherty. “This will be a pilot project to test the case for considering on-going trolley service in the future, for both upcoming holiday seasons and throughout our peak summer season.”

The trolley route will connect the above-mentioned stops on a roughly 20-minute schedule, allowing riders to park in one area and easily reach another area of greater downtown Edmonds without the hassle of finding a new parking place.

In addition, when visitors disembark from the Puget Sound Express whale-watching boats, the trolley will be scheduled to meet them to offer a free ride up to downtown Edmonds.

With 20,000 to 30,000 annual whale-watchers coming to Edmonds, the trolley service should help the economic impact of those visitors, Doherty said.

Likewise, with the popular Edmonds Summer Market open on the same upcoming August Saturdays, market-goers will have a trolley stop on Main Street to allow them to travel down to the waterfront.

“After experiencing the success of our holiday trolley, as a local shop owner and member of the Ed! board, I’m thrilled to see the trolley return for a summer route this August,” said Pam Stuller, owner of Walnut Street Coffee.

“It links our charming downtown and amazing waterfront, giving locals and visitors another reason to come explore Edmonds.”