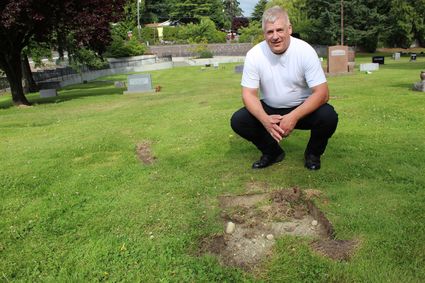 Jay Larkin at the site of his mothers memorial at the Edmonds Cemetery. Her memorial marker is now being repaired.

On an otherwise slow evening Friday, June 28, the Beacon received an email from Renee Jones with the following subject line: “A Friday, a truck, the cemetery.” That, of course, grabbed our interest.

An attached photo showed a long-distance shot of a black Toyota pickup in the cemetery lodged onto what we assumed was a tombstone. We posted the photo on Facebook, and it immediately took off. As of Wednesday this week, the post had 42,000 page views.

We had to know more, so an email to Edmonds Police Sgt. Shane Hawley disclosed that a man in a truck had driven over a grave marker at the Edmonds Cemetery and was unable to get the vehicle dislodged. He drove into the cemetery from its north entrance on 15th Street SW.

A patrol officer arrived and, based on signs and symptoms the driver showed, began an investigation for DUI. The man, a 61-year-old from Shoreline, was arrested and ultimately booked into the Snohomish County Jail for DUI.

"The suspect was booked for DUI after refusing to provide a breath sample," Hawley said. "The officer wrote a search warrant, authorizing a blood sample be collected. The sample will be sent to the Washington State Patrol Crime Lab for testing."

As rare as the event was, Edmonds Cemetery sexton Cliff Edwards said he’s had several vehicles drive into to the cemetery by other means than the two main entrances.

“This is the seventh time in the 28-plus years that I’ve been here,” Edwards said.

After the Beacon initially posted the story on Facebook, Jay Larkin posted before-and-after pictures of the damaged memorial.

The memorial is for Jay's mother, Janice Larkin, who died in 2015 at age 80. It was crafted of stainless steel and concrete, and its curved design was certainly one of the most beautiful in the Edmonds Cemetery. It was handcrafted by Jay Larkin’s brother, Kent, in his Ballard studio, and features beautiful engraving.

“It’s stunning,” Jay Larkin said. “My brother does a lot of really good things with his hands, and this is probably his crowning piece.”

Kent Larkin is now working to repair the memorial.

Although the Beacon is not naming the man arrested in the cemetery, Jay Larkin knows who he is. Larkin, 56, is a sheriff’s deputy who works in the Snohomish County Jail in Everett.

“I don't harbor any resentment towards him. I hope if he's got problems that he takes care of them,” he said.

“It's important to live every day of your life with a smile on your face. He made a mistake; it's not the end of the world. It’s replaceable. Nobody was hurt, thank goodness. There's times that I've been here where there's actually been walking groups. We’re lucky nothing happened, because the surface of this headstone is considerably harder and stronger than our bones and our bodies.”

Larkin, who lives in Shoreline, said the family will determine if the man arrested has insurance to pay for redoing the memorial.

Janice Larkin was an Army wife and mother to her four children. She worked for Boilermakers Local 104 in Seattle and for a property management firm in Magnolia.

This is the kind of woman she was:

A long time ago, she visited Evergreen Washelli on Veterans Day or Memorial Day  Jay Larkin doesn’t recall which, but it doesn’t really matter  and at a section for veterans came across the headstone of a man with no flower on his gravestone.

Everyone else had one.

So Janice decided to adopt the headstone of James Sylvester Harp, who died in 1965.

“She would go there a couple times a year for those holidays,” Larkin said. “When she developed Alzheimer's, it was too much. And so I started doing that with my son every Memorial Day, dropping a penny off on James’ headstone. We’ve been doing it for 30 years.”

After some research, Larkin discovered that James Harp was a victim of one of the most notorious crime sprees in the area during the 1960s.

Harp was murdered near the intersection of NE 147th Street Avenue NE in Seattle, which is now Shoreline. Harp was a gas station clerk.

Two airman from Paine Air Force Base, now Paine Field, were convicted of killing Harp and two others.

The convicted killers, Antonio Wheat and Arthur Aiken, both now in their 70s, are still in prison.

“Even though my parents were divorced, they still remained friends,” Larkin said at the cemetery. “They bought plots in the 1970s.”

Larkin stretched a hand out to several plots surrounding his mother’s.

Through it all, Larkin has managed to maintain an upbeat attitude about the recent graveyard incident, as no one was hurt.

“My mom's uncle always said that my mom loved it when people stopped by,” he said. “But I thought, maybe this was taken a little too far.”

I see the moon and the moon sees me 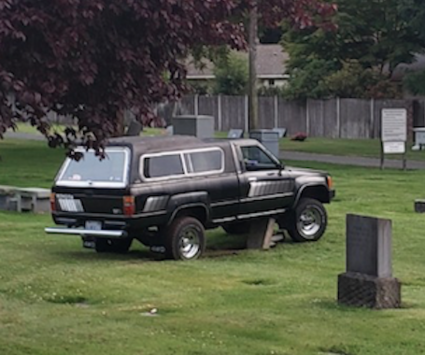 A pickup truck got stuck on a memorial marker after driving into the Edmonds Cemetery.

and the moon sees the one that I can’t see,

God bless the moon and God bless me,

And God bless the one that I can’t see