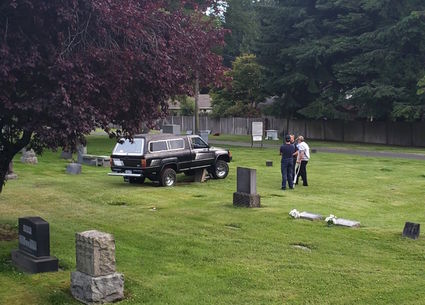 A Toyota truck ran over a grave marker at the Edmonds Cemetery June 28. The driver was arrested and charged with drunken driving.

Edmonds Police Sgt. Shane Hawley tells us that a caller reported Friday, June 28, that a man in a truck had driven over a grave marker at the Edmonds Cemetery and was unable to get the vehicle dislodged.

A patrol officer arrived and, based on signs and symptoms the driver was exhibiting, began an investigation for DUI. The man, a 61-year-old from Shoreline, was arrested and ultimately booked into the Snohomish County Jail for DUI.

Not to mention disturbing the peace.

"The suspect was booked for DUI after refusing to provide a breath sample," Hawley said. "The...