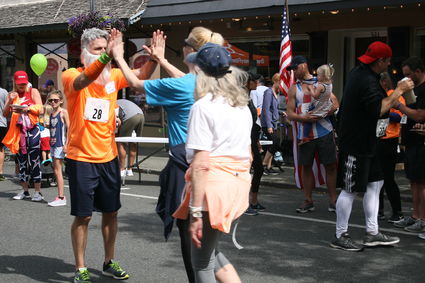 When Edmonds native Brian Hanchett learned in 2015 that the 5K Fun Run for An Edmonds Kind of 4th was going to be renamed the Beat Brackett 5K, he approached Edmonds Chamber of Commerce President and CEO Greg Urban.

“I asked him who was going to be Brackett for the race, and they told me they hadn’t decided,” said Hanchett. “He asked, ‘Do you want to be Brackett?’ I said, ‘Sure.’ ”

On Thursday, Hanchett will portray Brackett  the logger who established Edmonds in 1876 and was the city’s first mayor  for the fifth year in a row.

“They asked me what my typical 5K time was, and the rest is history,” he said. “When I was in high school, I decided to try cross-country, and I guess it just stuck with me. Running is such a simple sport  all you need are some shoes, and you’re good to go.”

Second, he studied up on Brackett in “Edmonds: 100 Years for the Gem of Puget Sound,” published for Edmonds’ centennial of its incorporation in 1990 by The Edmonds Paper, the precursor to the Edmonds Beacon, where Hanchett was the editorial cartoonist for 14 years.

“I love being George Brackett,” Hanchett said, “because the 4th of July is such an amazing day to be an Edmonds resident. I remember going to the parade when I was young and then walking over to see the firefighters battle it out (during their annual competition) and watching the fireworks from the deck of my parent’s house where I grew up.

“The 5K is just one more thing that makes that day so special.”

When not portraying Brackett, who would be 178 years old today, Hanchett  who graduated from Edmonds High School and still lives in Edmonds  is a counselor at Skagit Valley College in Mount Vernon.

Independence Day is his fun day.

On Thursday, Hanchett will transform into Brackett by slipping on a fake white beard  Brackett was known for his wooly facial hair  that sets him apart from the other runners.

Once in costume, Hanchett/Brackett challenges only the serious runners to beat him to the finish line. As an added incentive, all 5K participants get a head start, but only about 50 runners per year ever beat him.

Anybody who does manage to beat him to the finish line gets their very own “I Beat Brackett 2019” wristband.

“There are so many people and families and pets that participate; it’s an honor to be a part of it,” Brackett said. “I love running the race  although it is a bit challenging breathing through that beard  weaving through all of the people and then seeing them all cross the finish line. It’s a blast  I really look forward to it every year. It’s a great way to kick off the Fourth of July celebration.”

Funds from the event go toward putting on the Edmonds fireworks show, as part of the chamber’s An Edmonds Kind of 4th.

In addition to the 5K and the Baby Brackett 1K, the festivities include the children’s parade, main parade, and fireworks.