Brad Shipley: ‘I'm also not a politician. I’m doing this for the first time’ 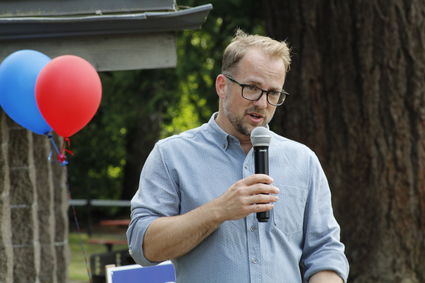 Brad Shipley kicked off his campaign to be Edmonds next mayor June 28 at City Park.

At Brad Shipley’s campaign cookout complete with a campfire, hot dogs, and s’mores at Edmonds City Park last Friday, supporters and community members had a chance to meet the fourth mayoral candidate.

His wife, Ranya Khalil, introduced him as someone whose grassroots campaign does not have any “political machines” supporting him, instead relying on friends and volunteers.

“I'm also not a politician,” said Shipley, a City of Edmonds planner who grew up in Riverside, California. He will face Mike Nelson, Neil Tibbott and Kristiana Johnson in the primary Aug. 6.