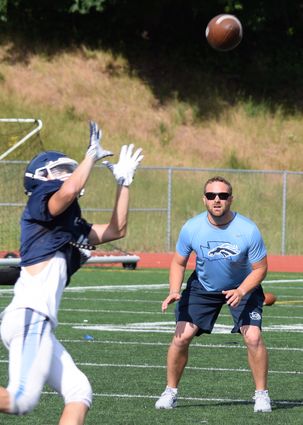 Leonard, who wrapped up his fourth season with the Mavericks, resigned to accept the head wrestling coach and an assistant football/safeties positions at Weiss High School in Pflugerville, Texas, a suburb of Austin.

The decision to leave Meadowdale, Leonard said, was made to further his desire to make coaching football a full-time profession. Leonard will be teaching only two classes at Weiss. He noted that offensive and defensive coordinators coach full time in Texas.

Leonard, a Bothell High School graduate, has family in Texas. An older brother and his family live in the area. But most of Leonard’s family, including his nine other siblings, live in the Pacific Northwest. So the decision to move to Texas wasn’t easy.

“It’s leaving my family and friends,” Leonard said. “Leaving this group of kids was what really weighed heavily on my mind.  If it’s not now, it’s in a couple of years. I had to take the emotion out of it. Otherwise, I wouldn’t have taken the job. From a career point of view, I needed to make the decision. It’s bittersweet.”

Leonard told his players of his decision during a team meeting Wednesday, June 19.

The eventual goal is to have football be his only source of income. He noted that there are only a few places where that is possible, one of which is in Texas.

A few weeks ago, a coach reached out to Leonard and the two started talking.

“I just planned on building a relationship,” Leonard said.

But Leonard subsequently was offered the wrestling and assistant football coach positions.

“It’s been a dream of mind to maybe step away from teaching and be a full-time coach,” Leonard said. “I really didn’t expect it to be so soon.”

Leonard will be packing up and leaving for Texas soon. He has to report to Weiss High School on July 20.

“My girlfriend and I have to find a place. She’s got to find a job,” Leonard said. “Once football starts, it’s going to be crazy. I need to be settled.”

Weiss High School opened in 2017 and has about 2,200 students. The school is in the 5A classification and Leonard said likely will be moving up to 6A, the largest classification, in a few years.

Leonard compiled a 25-20 record in four seasons at Meadowdale. The Mavericks advanced to the state semifinals in 2016 and qualified for the playoffs in 2015 and 2018.

Assistant coach James Harmon will be handling the rest of the Mavericks’ offseason activities, including this week’s team camp at Evergreen State College.

“We are confident we have great people working with our kids,” she said.

Marriott noted that the school has posted the position and it will be open until filled.

It is uncertain whether there will be a teaching position to go with the head coaching position. Last month, the Edmonds School District announced plans to cut 25 teaching positions in response to a $17.7 million budget deficit. Leonard was one of the teachers who spoke at a board meeting before the cuts were announced.

“Matt has been a wonderful coach for us,” Marriott said. “I’m very sad to see him leave. At the same time, I couldn’t be happier for him. It’s his dream.  I know he’s going to great things in Texas. That’s where his heart is.”

Marriott said the school is looking for the right coach to succeed Leonard.

“It’s a really exciting opportunity to come in and work at Meadowdale High School,” Marriott said.