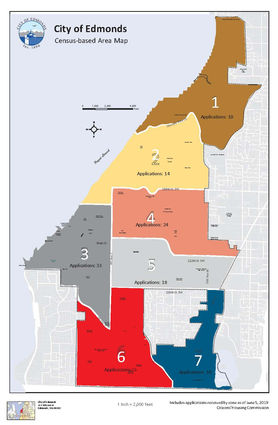 You can say that the public’s response to the call for candidates for the Citizens Housing Commission has been a success.

As of June 5, 124 applications have been submitted for 15 commissioner positions and eight alternates.

June 21 is the deadline for applications to start being considered by the City Council. The council approved the longer timeline (previously May 31) to ensure more people had time to apply.

Applications are organized by area into seven “zones” with roughly equal populations.

The “zones” system is intended to increase citywide input on housing policies.

So far, each of the seven zones has at least ten applicants.

All interested residents are encouraged to apply. More information is available at citizenshousingcommission.org/.

The Housing Commission was authorized this spring by the City Council to get broad input on policy ideas for expanding the range of housing available in Edmonds.

Commissioners will have meetings at least once a month and will sponsor other events around the city to share information and hear from the public.

By the end of 2020, the Citizens Housing Commission’s recommendations are due to the City Council.

It was earlier this year that, after hearing from citizens upset at the direction of the City’s draft housing strategy, councilmembers decided to halt the process and look into involving the public and offering more transparency.

“The housing commission would have a very specific focus,” Councilmember Neil Tibbott said in February.

“And the focus would be to develop housing policy options. Once those options are articulated, they would be brought forward to the council in the form of a recommendation. Having a broad range of participants serving in that would serve our city well for perhaps a decade or two.”

Some citizens complained that the City did not distribute adequate notices on past open houses concerning housing issues, even though the open houses were reported by local media and on the City’s website.

Because of that, the City sent out notices to every household in Edmonds alerting them to the newly formed Citizens Housing Commission.