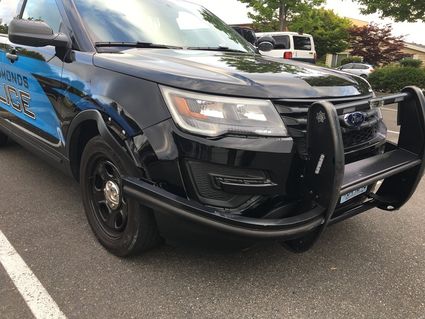 An Edmonds police car was damaged after being rammed Wednesday.

In the end, a suspect who rammed a police car and led officers on a high-speed chase was no match for Ace, a K-9 dog serving the Edmonds Police Department.

At about 4:40 a.m. Wednesday, June 5, an alert patrol officer spotted a vehicle with some front-end damage, and suspected it might have been in a recent collision, according to Sgt. Shane Hawley.

After the officer ran a check on the vehicle and discovered its license expired, she attempted to pull the driver over at Olympic View Drive and Wharf Street in Edmonds.

The driver fled and crashed a couple of blocks away.