Cadet on her way to dream job with Washington State Ferries 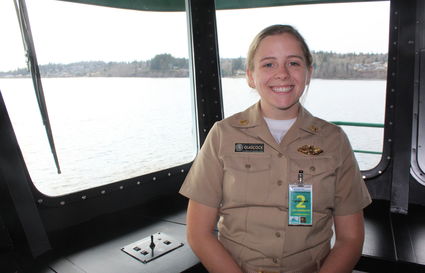 Natalie Glascock is getting shipboard experience on the Edmonds-Kingston route with Washington State Ferries.

It’s no surprise that Washington State Ferries is facing a near-term crisis  as the Beacon reported in September 2017  due to the vast number of captains and other workers retiring, combined with the lack of new, young employees willing to fill open positions.

On a recent trip to Kingston from Edmonds on the Chimacum, Glascock was quick to respond to a query on her goal after graduating from the academy.

Glascock is about one-third of the way through what is called a “sea year,” where she is required, as a marine transportation major, to sail for 330 days. She has already served on two commercial ships: The Green Bay, a car carrier, and the Marjorie C, a container ship.

The academy program is four years, with three at the school. Cadets are shipped out for four months their sophomore year and eight months their junior year.

While the Merchant Marine Academy is charged with training officers for the United States Merchant Marines, branches of the military, and the transportation industry, in recent years has been dogged by bullying and sexual harassment claims.

In 2016, the Department of Transportation made the academy a subject of an independent review to study accusations.

The department reviewed campus culture and the institution’s sea year.

“The maritime industry has made changes in regards to sexual harassment training,” Glascock said. “And the reason I am here on the ferries is because Washington State Ferries took the extra step to train their fleet to be able to accept cadets while other shipping companies are continuing to go through the process of training sailors.”

In Puget Sound, Glascock’s onboard education on ferries includes touring the engine room, watching crew members’ techniques for loading and unloading vehicles, and learning the ins and outs of cabin security sweeps.

When not shadowing crew, Glascock is able to get some studying in.

When her tour is over in a little more than a month, she will return to the academy to earn her third mate’s license and bachelor’s degree in marine transportation.

She’s currently living in Bremerton with her boyfriend, who works at the Puget Sound Naval Shipyard in Bremerton.

Glascock, the daughter of Glenn Whitt and Kim Henry Whitt, attended Dover High School, where she was a four-year starter in lacrosse and swimming, and a senior captain for both.

She was also a volunteer firefighter with the Dover Fire Department.

Glascock has her goals firmly in mind.

“I am loving my experience and time here,” she said. “The passengers and crew are very friendly. I am so excited to be here getting hands-on training before I graduate and come out here to work in the summer of 2020. I’d like to work my way up through the ranks and eventually be a captain, get my 45-year wheel clock, and retire here. Washington State Ferries has the views all around, and you’ve got the whale-watching, the wildlife.”

Puget Sound ferry travelers will no doubt be under the command of Capt. Glascock in the future.