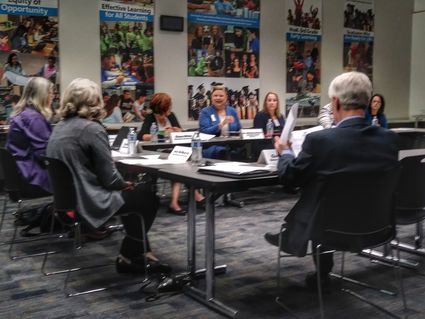 Less than two months after Edmonds School District Superintendent Kristine McDuffy warned that the district was projecting a shortfall of about $17.7 million for the 2019-2020 school year, the harsh reality of that statement looks like it will become a reality.

The possible result: A cost-cutting plan that could leave up to 43 teachers and eight assistant principals, as well as paraeducators and others, out of work by the end of this school year.

On Tuesday, during an early morning special meeting, McDuffy referred to the euphemistically named “reduced education plan” as “almost like a perfect storm.” The district’s board of commissioners will vote on it Tuesday, May 14.

Of the 43 teachers, 29 of those who could be let go would be considered part of a “provisional status release,” meaning those in their first year with the district and those with fewer than three years with the district.

The district plan, which McDuffy said is “fluid” and could change by next week, also includes not filling vacancies for three full-time custodians and one groundskeeper, as well as eliminating two instructional technology coach positions.

Also on the chopping block are assistive technology and certified occupational therapy assistant positions, as well as vacant positions for a technology support specialist and a special education data processing specialist.

Reductions in nonstaff costs, such as materials, supplies and operating costs, are also scheduled to go.

McDuffy said there are multiple factors contributing to the budget shortfall, including:

Even with the new revenue in programs like special education, McDuffy said, the district continues to fund its special education budget over the amount allocated by the state and federal government. She anticipates this gap to be in excess of $5 million.

It was last August that the Edmonds Education Association union and the Edmonds School District reached a tentative deal on a new teachers’ salary contract. It was ratified unanimously during the union’s annual membership meeting ahead of the first day of school.

Andi Nofziger-Meadows, Edmonds Education Association president, not unexpectedly, is opposed to the school district cuts, and said the teachers’ average 18 percent increase in pay is not the reason for them.

“If you recall, we settled the salary bargain before the end of July last summer,” she said. “We were the first district in Snohomish County to do so. It was not a situation where the district pushed off settling because of financial reasons. We settled because the district and the union agreed the salaries were reasonable and sustainable.

“The salaries we settled are similar or lower to those of our surrounding districts, and none of them are issuing layoff notices. They are hiring.”

She said that the cuts will mean students will suffer.

“I think anytime you cut classroom positions, you’re hurting kids. And this should not be what our district is about. We should be about supporting student learning and doing everything we can to put that forward. Does this plan do that?”

Nofziger-Meadows said the $17 million deficit is somewhat inflated. She mentioned seven different models the district can look at for predicting enrollment, which drive the main course of revenue. The one the district chose, she said, under-represented the number of students, which is responsible for part of the deficit and decision to reduce or eliminate positions.

“And they’re overpredicting expenses, which is also creating the deficit,” she said. “They're putting money in savings now, which is not how most people run their budget at home. So I think there's certainly other things they could look at.”

Nofziger-Meadows said the real story could be in the question, Why is the school district’s financial situation so different than every other district around it?

“Every other district around us is grappling with the same factors,” she said, referring to the McCleary lawsuit, where the state Supreme Court determined the state wasn’t fulfilling its constitutional requirement to fund basic education for all students, including compensation for basic-education teachers.

Gov. Jay Inslee has since raised the statewide property tax to add more revenue to the state’s almost 300 school districts.

In addition, legislators reduced how much school districts could collect from property tax levies approved by voters. This “levy swap” restricted the Edmonds School District's tax levy rate to a lesser $1.50 levy, or $2,500 per student.

It means less money for the district to spend on programs not considered to be basic education.

The Edmonds School District is looking to put a replacement technology levy on the ballot in 2020, as well as a construction bond the same year.

“It's our people, and it's excruciating. This is the toughest thing we have to do, to talk about impacting people's livelihoods. We have been looking under every rock. We've been examining every line item for the many months, knowing that this is serious, this is impacting Edmonds School District differently than others.

“We work in a profession that values relationships with one another and this makes the decisions that are ahead all the more difficult. We value everyone in our district. We also anticipate that there will be more retirements and resignations that will come in weeks ahead, so the number of staff who will ultimately be impacted by these reductions are not known.”