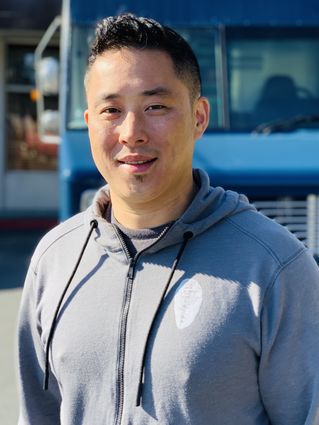 The Edmonds Chamber has named Shubert Ho the 2019 grand marshal of the An Edmonds Kind of 4th parade.

“Shubert Ho has been an integral part of the tapestry that the community of Edmonds weaves to bring the vision of the ‘why,’ making Edmonds such a desirable community to live and work in,” said Marilla Sargent, the chamber’s board chair.

According to the chamber, Ho and Leckie have supported the Edmonds community through donations to nonprofits like the Foundation for the Edmonds School District’s Nourishing Network program.

Shubert is co-owner and executive chef of Edmonds-based Feedme Hospitality and Restaurant Group. He was born and raised in San Jose, California, but settled in Edmonds with his wife Mira in 2006.

They were attracted to Edmonds because of its familiar homey charm and the fact that Mira has family roots here. Shubert opened his first business, Shooby Doo Catering, in Seattle. In 2012 he seized an opportunity to open a restaurant at Five Corners; he partnered with bartender Leckie and Bar Dojo was born.

Since then, Shubert and Leckie have opened Salt & Iron and The Mar·ket, and have plans in the works to open a new sushi restaurant later this year. They continue to run Shooby Doo Catering, as well as a food truck extension of Bar Dojo, aptly named Dojo Togo.

Ho’s wife, Mira, is a teacher at Hazelwood Elementary School in Lynnwood, and they have two young girls.

“All of our businesses are here in Edmonds, and we aren’t interested in seeking out new ventures anywhere else,” Ho said. “What I love about Edmonds is that it’s a cohesive town that supports its local businesses.”