‘Unsung Hero’: Almost half a century in Parks Department 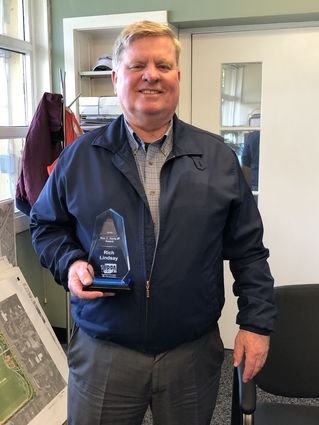 Rich Lindsay has worked for the City of Edmonds for 48 years.

Rich Lindsay started out in Parks and Recreation at the City of Edmonds at the age of 18, and never looked back.

He has spent his entire 48-year career serving the Edmonds community and has dedicated his life to making Edmonds a great place to live. Now, his decades of outstanding service are being honored by the Washington Recreation and Parks Association (WRPA).

The WRPA Ron C. Davis Unsung Hero Award recognizes individuals for their unwavering commitment, leadership, passion, and contributions to their profession. According to the WRPA, the award “honors those individuals who work tirelessly to make a difference in people’s lives, without being in the spotlight and without significant acknowledgment, but with steadfast grace and passion.”

Lindsay’s colleagues often describe him as an anchor in the community.

He is known for working tirelessly throughout every week  sometimes even throughout the weekend during weather events  and is often the first to respond during an emergency.

Lindsay mentors Boy Scouts trying to earn their Eagle badge, and works with youth who want to learn how to take care of the land. He always strives to be helpful.

The word “no” is not in his vocabulary, his co-workers say.

“Rich has an unwavering commitment to the parks in Edmonds,” said Edmonds Mayor Dave Earling. “He has worked tirelessly to make a difference without being in the spotlight. He works with steadfast grace and passion, serving our community both inside and outside of work. He has created a legacy for future generations in our community to celebrate while never seeking recognition for his exemplary service.”

One example of the community service Lindsay provides is the Santa’s mailbox during the holidays outside the historic Log Cabin across from City Hall. He and his wife conceived of the idea to install a mailbox for Santa downtown by the Christmas tree. They created and installed it about 25 years ago, and it has become an Edmonds holiday tradition.

Every November, Santa’s mailbox appears so children throughout the community can mail their letters directly to the “North Pole”  and then receive a reply from Santa himself.

“Rich is the kind of person who would give you the shirt off his back,” said Parks and Recreation Department Director Carrie Hite.

“He will go out of his way to make sure people are happy and enjoying their community. He is quiet and unassuming, while making a true impact on this community. Recently, there was a 3-year-old who threw her rain boot off the Edmonds fishing pier. Her mother was beside herself. Not only did she have a kiddo who was melting down, now she’d also lost a new boot that she’d just purchased for her daughter.

“Rich saw what was happening and asked one of his crew to rig up a pole and line, to see if they could retrieve it, which they did. The mom was happy, the kid was happy, and Rich was happy. This is one of thousands of happy stories that all lead back to Rich. He truly is Edmonds’ unsung hero.”