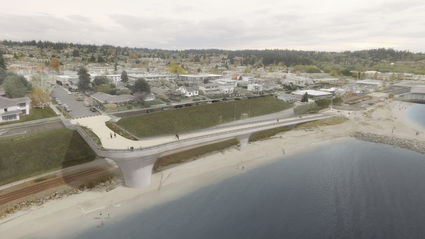 An illustration of the proposed Edmonds Street Waterfront Connector.

The controversial Edmonds Street Waterfront Connector is a step closer to fruition after the state Legislature, finalizing its 2019-2021 biennial budget, awarded it another $1.05 million, for a total state contribution of $7.05 million.

With another $1.5 million earmarked from the Port of Edmonds, the $8.55 million amassed so far is a significant local match to seek federal funds for the $27.5 million project.

The news is sure to be a disappointment for members of the mysterious No Sunset Connector local group  which has failed to respond to numerous inquiries from the Beacon  but was applauded by Edmonds Mayor Dave Earling on Tuesday.

“I’m delighted that the state continues to see the vital importance of this project to Edmonds by awarding us these additional funds,” he said in a news release.

The connector is intended to provide unimpeded emergency-response access, as well as continuous pedestrian and bicycle use, to and from the waterfront.

“While some have yet to appreciate the crucial need for this project,” Earling continued, “it’s clear the Legislature understands that mounting train volumes will soon create a truly unsafe condition for the hundreds of thousands of visitors and residents along our waterfront.

“With Main and Dayton streets blocked more frequently and for longer periods, response to life-threatening emergencies will be increasingly delayed. The connector will solve this critical problem.”

Some, including the group opposing the connector, say it’s a waste of money, even though the Legislature has funds available for projects such as the connector available in its transportation budget.

Others have complained, most notably in letters to the editor in the Beacon, that the connector would be an eyesore and invite the homeless and other perceived shady characters.

In addition, Councilmembers Diane Buckshnis and Mike Nelson  the latter who is running for Edmonds mayor  have changed their minds on the connector after initialing approving it. They have stated that the money could be used for other important City projects.

“My position has not changed, as there are less-costly scenarios, like a triage center located west of the railroad tracks to complement the fire boat Marine One,” Buckshnis said Tuesday.

“From a community perspective, it will drastically change our one public beach west of the ferry, which includes the dive park. Traffic patterns will also need to change for the loading and off-loading of ferry traffic, which leads to more environmental concerns. The WSDOT long-range plan had included some sort of pedestrian overpass, which never has been vetted through the City Council.”

Numerous studies on the connector were completed by a commission appointed by the mayor, and the public clearly stated its preference for it in an online poll.

Regarding Highway 99, Earling said that the state has recognized the successful planning and concept-design steps the City has taken on the planned improvements to the busy corridor.

Earling said that making these funds available this year will help the City continue its design efforts to make projects on Highway 99 ready in 2021 to utilize the remaining $8.7 million, especially as leverage to seek federal matching dollars.

The future of the new Civic Park also looks brighter, as the Legislature is providing $1.35 million for the development of Edmonds’ signature downtown park.

With these funds lined up, the $12 million project’s funding package is taking shape, Earling said.

Parks and Recreation Director Carrie Hite said she hopes to speak with councilmembers later this year about potential options for filling the remaining $3 million gap in order to meet the project’s scheduled groundbreaking in the April or May timeframe of 2020, with subsequent park construction expected to be completed some 10 to 12 months later.

“Developing Civic Park has been a long-standing goal for the City of Edmonds and our community,” Hite said. “We are so grateful for the state capital budget appropriations for helping fund this signature downtown Edmonds park. We are now even closer to our goal.”

“I’m always pleased when my seatmates and I can successfully advocate for state capital investments in the communities we serve, such as the funding to continue the development of Civic Park,” said Rep. Strom Peterson (D-Edmonds), who serves as vice chair of the House Capital Budget Committee.

Likewise from the capital budget, the Legislature allocated $515,000 for the Dayton Street pump station, a project intended to stem flooding around Dayton Street and SR 104, as well as in the ferry holding lanes.

“This session I’m most excited about the funding for the Dayton Street Pump Station project and the work at Japanese Gulch and Meadowdale Beach Park," Peterson said.

"These three projects will aid in restoring our ecosystem and have long term benefits in salmon and orca recovery, something critical not just to our region, but the entire state.”

Said Public Works Director Phil Williams: “This project has a double benefit, in that it will also help stem the influx of excessive fresh water into the Edmonds Marsh, which is a necessary precursor to restoring that saltwater marsh.”

The 2019-21 capital budget includes a $1 million grant to help increase the behavioral health treatment capacity of the Community Health Center of Snohomish County-Edmonds clinic on Highway 99.

“This capital investment, and the others like it in Snohomish County and around the state, are a significant part of addressing the opioid and behavioral health crises we face,” Peterson said. "I am incredibly proud of the bipartisan effort to make these smart investments.”