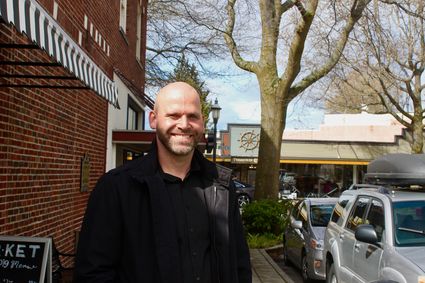 Andrew Leckie in front of The Market Fishmonger & Eatery in Edmonds: When you get diagnosed with something like that, you can either just dig yourself into a hole or you turn your thought process around.

When Andrew Leckie was diagnosed with brain cancer in 2011, his first thought was that he wouldn’t be a part of his daughter’s future.

“My initial thought was that I’ve got a baby, and I want to see her go to high school; I want to see her get married and all these things,” he said as he wiped away a tear during an interview last week in Edmonds. “Sorry, you get choked up when you talk about it.”

Leckie and his wife, Ciara, had just had their first child while living in Vienna for Ciara’s teaching job. When they returned home to Edmonds for Christmas, Leckie suffered a frightening grand mal seizure. Ciara quickly called 911, and an ambulance rushed him to the hospital.

Doctors later discovered a spot in his brain. They performed a biopsy over the holidays, and Leckie and Ciara were able to return to Vienna. But doctors were concerned the spot had grown, and the couple returned home for Leckie to undergo surgery and treatment in the summer of 2012.

That year was, as you can imagine, a full one for Leckie and his family. Not only did he have the surgery around that time, but he also discovered  in the recovery room after his surgery  that he and Ciara were pregnant with their second child.

“It was exciting because we were wanting to have kids during that period. It was a weird situation, and life was really happening back then.”

“What many people don’t know is that Andrew was just starting treatment the first year we opened Dojo over seven years ago,” Ho said this week. “The restaurant industry is already extremely taxing on your mind, body and family.”

It was, Leckie reiterated, a crazy and difficult year.

“I was doing chemo and radiation all the way through the opening (of the restaurant), and then we also had our second baby.”

Leckie was clearly moved as he spoke at his latest restaurant with Ho, The Market Fishmonger & Eatery at the Edmonds fountain.

As the chef and other employees prepared for the day, Leckie sat at a bar stool near the window and glanced out occasionally as he explained the emotions and trials he went through.

Because of the radiation to treat his brain cancer, he lost some of his hair.

“That was emotional, doing this treatment and surgery, but then you put your hands in your hair and big clumps of it come out,” he said. “You know that’s a potential that probably will happen, but when it happens, it was pretty challenging. It’s such a vain thing, but it’s one of those symptomatic things that you deal with.”

With everything Leckie has been through, he said he keeps a positive and grateful attitude.

“When you get diagnosed with something like that, you can either just dig yourself into a hole or you turn your thought process around,” he said. “I had actually had a very big clarity of life perspective when dealing with this. I rode that wave for a while. Which was really good, because during that period it was kind of rough, with treatments and all that.”

Keeping a positive life attitude helps a lot because it can be challenging at times, he said.

Cancer has affected his life story more than just with his own health. Leckie has lost friends from the disease, and has friends who are dealing with it right now, he said.

On May 5, Leckie will once again participate in the Seattle Brain Cancer Walk, a national fundraising event to raise awareness about brain cancer and fund brain cancer research and clinical trials in the Pacific Northwest, according to the Swedish Medical Center Foundation website. The one-mile walk will wind throughout the grounds of the Seattle Center.

Leckie completed his first walk in 2013 alongside his surgeon and a friend, both who later died from cancer.

“The first walk was really emotional,” he said. “I had a picture with those two guys and then the next walk  none of them are there.”

Leckie and his close friend, who also had a brain tumor, formed a group for the walk called “The A-Team” after both of their names  Andrew and Austin.

“You see all the people who have been affected by brain cancer (at the walk), and you see the devastation of it,” he said. “How their spirits are still high, and how they’re pushing to live.”

According to Leckie  who is now 42  research shows that life expectancy after a certain tumor, including his, is five to seven years.

“They don’t think that’s the case for me now, because I’ve gone through this process.”

It’s already been seven years since Leckie was diagnosed, and his checkups have moved from every month to every quarter, and now to twice a year.

“They haven’t seen any changes, and everything looks pretty good.”

To raise money for the walk, Leckie throws a brain cancer benefit each year. Originally at Salt & Iron  another Leckie and Ho collaboration in Edmonds  this will be their third year hosting the benefit featuring raffles and drawings. The benefit on April 23 at Bar Dojo raised $6,800 and was open to the public, where attendees entered into raffles and drawings with a limited menu.

The first year of the benefit at Salt & Iron raised almost $10,000 for the walk, Leckie said.

“One of those two years, we were the second or top earner for the walk. It’s just cool we were able to raise that much, and it’s all because of the help of this community.

“The Edmonds community has been amazing. I’ve been nothing but blessed for that, which is really sweet.”

Leckie grew up in Edmonds, graduating from Edmonds-Woodway High School before attending Carroll College in Montana. Leckie entered the restaurant industry after traveling to Europe with friends after graduation.

He worked as a bartender and did mortgage work on the side.

At that time, Ho and his wife were running a catering company that Leckie worked for occasionally before moving to Vienna.

When Ho decided to open Bar Dojo, Leckie jumped on board.

He started as a general manager and, later, at Salt & Iron, before moving into his current role of overseeing the business side and financial work while Ho serves as executive chef.

Leckie and his wife decided to raise their children in Edmonds after weighing options closer to Seattle. Much of his family has relocated to Edmonds as well.

“We ended up staying here, and then all of a sudden, we did the restaurant thing, and now we’re not going anywhere,” he said with a laugh.

Both Leckie and Ho’s wives are educators in Edmonds School District, and the couples have raised their kids together, he said.

So it’s not surprising Leckie and Ho run their business like a family and try to be as involved in the community as they can.

“When you’re running a business, you have an opportunity to do that,” Leckie said. “It can be as simple as giving a gift card to schools or sponsoring some things at the schools. It’s been an interesting stretch, or journey, with family and some adversity, but it’s all been coming together.”

With three restaurants and a catering business in Edmonds, expanding their business isn’t off the table yet.

“We are always open to possibilities,” Leckie said.

“We’ve been lucky with staff, and been lucky with all the people that we have been able to work with; we have a great community, too. It’s a hard business. It’s fun and worthwhile, but it’s a lot of work.”

Leckie has an infectious laugh, which is refreshing to see after all he’s been through. With every story and recollection of his life, it’s evident Leckie is grateful and has remained hopeful through it all.

“I just feel blessed that I am where I am,” he said. “It’s been a journey. My family and friends have been amazing, and I’ve had tons of support.”

That support includes praise from his business partner.

“Through ups and downs of healing from this terrible disease, Andrew was really able to rise above adversity and still give our customers a big smile and his undivided attention,” Ho said.

“Today he is a stronger man for that, as we have grown into a hospitality and restaurant group serving the fine citizens of Edmonds and beyond.”