After attempting to elude police, murder suspect arrested in Edmonds 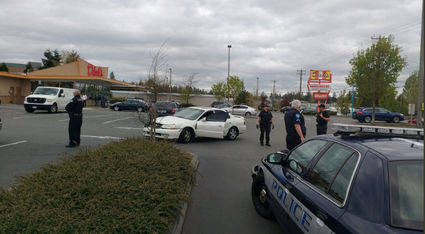 Edmonds police officers assisted Everett officers with apprehending a murder suspect at the Winco parking lot at 220th and Highway 99.

A pursuit of a murder suspect that began in Everett ended in Edmonds in the Winco parking lot at 220th Street SW and HIghway 99 Tuesday, April 23.

Everett police report that at about 4:20 p.m., officers located a murder suspect in a vehicle at Seventh Avenue SE and SE Everett Mall Way. The vehicle fled as officers closed in.

Officers, believing the suspect had a weapon and was a threat to public safety, began a pursuit. While fleeing, the vehicle struck multiple parked cars before speeding southbound on I-5.

In Edmonds, the vehicle left the freeway and stopped in the Winco parking lot; t...