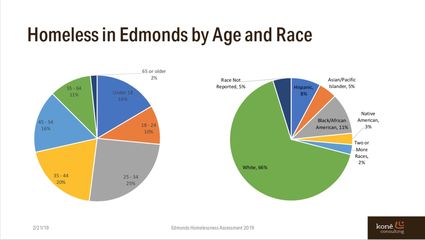 In December 2017, the City Council assigned $250,000 in the City’s 2018 budget for a Homelessness Response Project. Part of the funds were used to hire Edmonds-based Koné Consulting to conduct a rapid assessment of the homelessness issue in Edmonds, which took eight months to complete.

The report found that there are about 230 Edmonds residents experiencing homelessness, meaning they are without housing (unsheltered or car camping), homeless with housing (short-term hotels or couch-surfing) or in an emergency shelter or domestic violence shelter, based on Department of Social and Health Services (DSHS) data.

The project had a more personal connection for Alicia Koné, owner and president of Koné Consulting, who has lived in Edmonds since 2001.

Instead of relying only on data and surveys, Koné Consulting hit the streets to speak with homeless people on a couple of different occasions, Koné consultant Karin Ellis said.

“For our interview protocol, we asked similar questions to everyone we talked with regarding what their experience was that lead them to becoming homeless, the challenges getting housing again, and other barriers,” Ellis said.

“There is some sensitivity with this issue,” Koné said. “We worked with a police social worker in Lynnwood and Edmonds, and she would tell you that she’s only talking to folks that the police are aware of.

“Because first responders are still only seeing a subsection of people experiencing homelessness in Edmonds, we tried to balance that by not just relying on that channel to locate people,” she said.

“It is intimidating to approach an RV that has been parked for a week, and it’s another thing to knock on the door and ask for an interview. We did that, but we did that in controlled circumstances so that we had a sense that we would be safe.

“It’s not always an easy process (to do street outreach), but we were really glad to be able to talk to some folks directly,” Koné said. “We value that perspective, and it needs to be heard.”

Ellis has had experience with doing street outreach about 10 years ago, and said that people experiencing homelessness were appreciative of the city’s efforts to look into this issue more.

“They were really willing to talk to us, which I was surprised about,” she said. “Most appreciated to have someone hear their stories.”

Family crisis was the most frequent reason for homelessness, based on a 2018 survey done for people experiencing homelessness in Snohomish County, the report cited.

As previously reported by The Beacon, an idea to house homeless students and families at Rodeo Inn on Highway 99  with the hope that the Edmonds School District would possibly support the motel’s purchase, and with support from Edmonds Mayor Dave Earling  was shot down by Lynnwood City Council on March 25 due to costs.

“From the data we accessed from 2015, we know that from 2015-2019, housing costs have increased, and we think that it’s likely that there are more cost-burdened households over the last three years,” Ellis said.

“Unlike the Seattle area, more cost-burdened households are homeowners (in Edmonds) and not renters,” Koné added.

The report found that there is a large group of people entering retirement age who have owned their homes for more than 30 years. They may have purchased those homes when they were more affordable, but now are faced with high property taxes.

“Those are the stories we didn’t highlight,” Ellis said. “The folks who are at risk of homelessness; we need to hear more from the perspective of those people, whatever the next steps are. What can we do to help people at risk stay in place?”

“They appreciated that we had put rigor into the data and analyzed it, and subsequently, it has been interesting because we haven’t done work in this community before, as we usually work at the state, county and national level.”

Since the presentation to council, there have been actions to find solutions to homelessness in Edmonds.

On Monday, April 15, Council President Adrienne Fraley-Monillas was on her way to a meeting with Councilmembers Dave Teitzel and Mike Nelson to discuss issues the report raised.

“What we will be discussing are issues around the report, and perhaps try to come to consensus, though I’m not sure we’ll get to consensus,” she said. “Pursuing this will cost money, whether that be emergency room visits, first responders, criminal activity or paying for it to figure out what to do.

“The report was fascinating. It showed what is happening in Edmonds and that in our home we have hidden homelessness, more than tents.

“Although, I saw my first person in the daytime sleeping on the sidewalk up against a business wall. It’s the first I’ve seen that happening in the daytime.”

For instance, unlike the common misconception, the majority of people who are homeless in Snohomish County are from the area originally.

Fraley-Monillas said that that fact had stuck out to her.

“Non-stable housing includes people staying with friends, on a couch, in cars  those are all part of the survey, as best as we can estimate it.”

“What we can do preventatively, that’s the key. If it was so easy to resolve homelessness, everyone would do it; Seattle and other large cities would have done it. It’s much more complicated than people understand.” 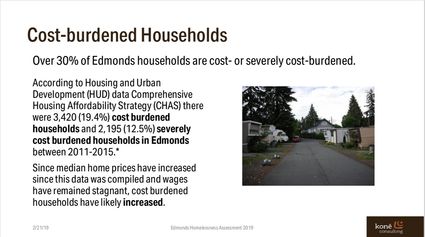 The city council is moving to talk about phase two of the project, which is community outreach as suggested by the assessment, Fraley-Monillas said.

“Talking to communities in the city about this issue, talking about homelessness, having public input  that’s something we’ve seen in Seattle as far as getting public input and how they see the issue.

“It will be up to the seven members of the council to decide where they want to go next. We (Teitzel, Nelson and herself) are the filter for them. One of the things that Edmonds needs to focus on is preventing people from being homeless. What can we do to keep people in their homes?”