Fire at Five Corners in Edmonds contained, no injuries 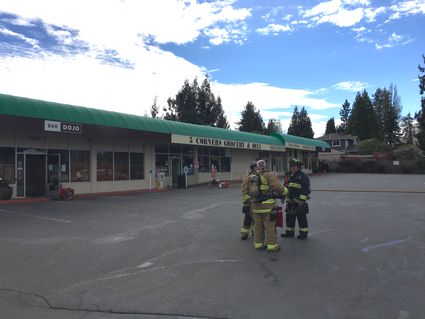 A fire that began Wednesday afternoon at Five Corners was quickly extinguished by firefighters.

A fire that started in a shed at 5 Corners Plaza Wednesday, April 17, was quickly contained by firefighters.

Black smoke could be seen in the area after the fire broke out just after 3 p.m., said South County Fire spokeswoman Leslie Hynes.

The fire extended to the exterior of the backside of the strip mall behind Bar Dojo and Five Corners Grocery & Deli.

“It was mostly smoke damage,” said Bar Dojo co-owner Shubert Ho. “It was fire from an adjacent property.”

The fire occurred on the southwest corner in the strip mall occupied also by Casa Oaxaca, Noodle Hut, Frankies Barber...