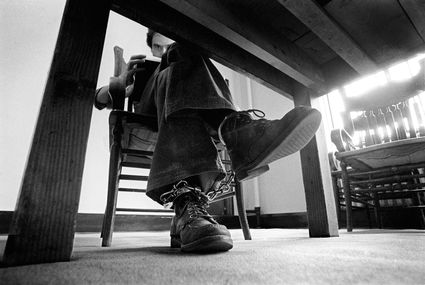 To get to Pulitzer Prize-winning photographer Jerry Gay, you take a short drive to Everett and find a duplex with peeling paint a few blocks from the freeway. Two churches are across the street; another is nearby.

After a few knocks, Gay answers the door. He smiles, offers his hand, and takes a seat on a couch draped with colorful quilts. Religious icons dominate the walls and tables.

Gay is a caregiver for 92-year-old Dorothy, who has rented the home for 20 years and pads around the kitchen in her robe.

“Most all of this is hers,” Gay said, looking around the room. He has religious inclinations, too, but said it’s more spiritual. “All my stuff is in storage. I was living down the street in the basement of a dental clinic, where my third wife”  he allows a quiet chuckle here  “where her husband had the clinic.”

I’m here to talk to Gay about Ted Bundy.

You may have noticed a spike of interest in the infamous serial killer. Jan. 24 was the 30th anniversary of Bundy’s execution at Florida State Prison southeast of Jacksonville. The media have jumped on board. Netflix is running “Conversation With a Killer: The Ted Bundy Tapes”; Netflix will also debut the movie “Extremely Wicked, Shockingly Evil and Vile” on May 3 after debuting on select screens nationwide. The movie stars former teen idol Zac Efron as Bundy.

And in February, ABC’s “20/20” chimed in, airing “Bundy,” which included a brief segment with Gay, who in the summer of 1977 spent three hours with the serial killer at Garfield County Jail in Glenwood Springs, Colorado.

His low-angle image of Bundy’s shackled feet under the room’s desk  Bundy clutching a book, one eye staring at the camera  is justly famous.

There’s little disagreement that Bundy was a monster. He confessed to killing more than 30 women and girls, starting at the University of Washington. At least two were only 12 years old. He bludgeoned them. He sexually assaulted them with objects. He cut off the heads of at least a dozen. He was fond of necrophilia, but kept one victim alive for a week.

It’s important to know these details when noting Bundy’s crimes.

Jerry Gay acknowledges Bundy’s killings. But all these years later  perhaps because he considers himself a documentarian, perhaps because he spent three hours with a soft-spoken, good-looking killer who fooled a lot of people  he refuses to call him a monster.

Perhaps Gay’s background and frame of mind explains why.

Jerry Gay’s family lived in Lynnwood, but Gay attended the old Edmonds High School on the hill above 100th Avenue West, where he graduated in 1964. He later lived on Edmonds’ Maple Street for a while.

Gay started taking pictures early, in the seventh grade at Lynnwood Junior High. All of his reports were photo books. A teacher steered him to a dark room and later to the school’s yearbook.

Gay’s photography skills grew at Everett College, then were refined at the renowned Brooks Institute of Photography in Santa Barbara, which closed in 2016. His eye for detail led him to jobs at The Daily Herald and The Seattle Times, as well as to the St. Paul Pioneer Press, Santa Barbara News-Press, Newsday, Los Angeles Times and Maui News.

He became president of the National Press Photographers Association and created “Picture Magazine,” a monthly insert in newspapers that lasted two years.

Gay's life changed in October 1974, while working for The Seattle Times, when an assignment editor sent him to a house fire in Burien. His published photo of four weary firefighters taking a break - titled “Lull in the Battle”  earned him a Pulitzer, the most prestigious award in journalism.

Meanwhile, after his killing spree in Washington, Oregon, and Idaho, Ted Bundy moved on to Utah and Colorado.

In Utah, he was arrested for the first time  a state patrolman pulled him over and found a ski mask, crowbar and other items in his VW Bug. He was later extradited to Colorado.

In June 1977, while Bundy was transported from Garfield County Jail to Aspen for a preliminary hearing, he lept from a courthouse second-floor window and survived several days in the woods before being captured.

A few months later, Gay  who by then was a regional director with the National Press Photographers Association representing television, newspaper and magazine photographers and photojournalists, got his chance to take pictures of Bundy back at the county jail, where Bundy remained in custody.

(All this occurred before Bundy escaped again  just five months after meeting with Gay  and fled to Florida, where he would go on his final killing spree, most infamously at Florida State University in Tallahassee. He attempted to kidnap a 14-year-girl in Jacksonville, who just happened to be the daughter of the city’s chief of detectives, but was scared off by the girl’s brother.

(Bundy’s last killing occurred in Lake City, Florida. He kidnapped a 12-year-girl from a junior high school. Her mummified remains were found weeks later in a pig shed near the Suwannee River.)

“I got there, and the police told me to go to the bathroom and then come back, because you’re going to be in this room three hours with Bundy, and you can't leave,” Gay said. “They didn’t want to keep coming to check in on me. So I was locked in there with him.”

So what transpired in those 180 minutes?

“Well,” Gay said, “that was a long time ago. My approach to taking pictures and working with people to get the intimate pictures I was able to get, and because of my spiritual background  it's nothing to do with religion  but just what I came to learn from all of that was loving people.

“But then when I take pictures, it wasn't just me taking them. I would get involved with people first when I could, not the accident scenes and fires, but when you're taking the feature pictures. I was getting to know people and then make the energy, so they were helping create the pictures. They would be more willing to give to me because we were making the picture. I just wasn't taking them.”

Gay said he wanted to create a neighborly, caring process with Bundy. Gay frequently calls him “Ted” when explaining this.

“I let him create. He had shackles on his feet. I would get on the floor, he would just get totally involved in his law book. I just let him give himself to me. I wasn’t there to judge him. I was there to document him. His life was there now, and I had to show my appreciation for him giving to me, so he would keep giving and not me at some point act like a journalist or judging him.”

Gay said he realized the extent and brutality of Bundy’s crimes. But still.

“Well, working for newspapers all those years and having a scanner in my car and going to more and more situations  Ted wasn't alone in being a troubled son of a gun; I don't want to go into the bad words. Just look at what happened a couple of days ago in the news, a fellow was getting fired, and he was angry. He brought a gun and killed five people in the office. Yeah, I mean, and that was within five minutes.”

“Our whole world is full of guns now, and all the TV shows promote violence; there’s all these heroes killing people. Our world is full of judging, and we've lost peace, love and caring. Look at our presidency; he's denouncing half the country.”

Gay said he wondered what happened to Bundy to lead him to commit his horrible killing spree. He said he got an inkling about a decade ago when going through his negatives from his day with Bundy.

“I thought, these are some nice pictures. I thought, I'm going to call his parents and see if they'd like a nice picture of their boy.”

Gay discoursed into Bundy’s background, much of which is available in the late Ann Rule’s seminal true-crime classic, “The Stranger Beside Me.”

“Ted's mom, back in the ’40s, was being a wild and crazy girl, and she got pregnant with a sailor, who quickly left. There were no abortions. Can you imagine socially in the ’40s, getting pregnant, having sex? This wasn't the ’60s with Playboy magazine and rock ’n roll. No, she was a social outcast.”

The 22-year-old girl, Louise Crowell, gave birth to Bundy (he received his last name after Louise married John Culpepper Bundy); her parents told young Ted that they were his parents, and Louise was his sister.

But Louise eventually took her son and moved from Philadelphia to Tacoma, where she had relatives and found a home in the shadow of the Tacoma Narrows bridge. When Bundy found out his parents were really his grandparents, he was devastated, Gay said.

So, a decade ago, Gay paid Louise and John Bundy a visit. John Bundy told him to see Louise, who promptly told Gay, in so many expletive-laden words, to get out of her house.

“I learned of the angers and frustrations and this baby, she got in trouble in having the baby, and then her parents raised him, gave him up. And then her kid becomes the infamous Ted Bundy, mass murderer.”

Gay leans back and closed his eyes.

“Did anybody want to talk about the importance of doing the right thing and maybe analyze why Ted went crazy? No, they didn't. Nobody took any information about anything. It's just, they just, this person killed, that person killed.”

I could have spent more time with Gay  he had much more to say  but felt I’d had enough. More than enough. 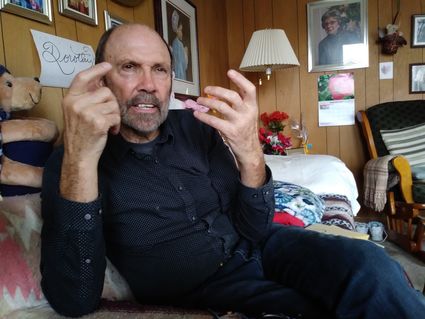 Jerry Gay, who took pictures of Ted Bundy: I wasnt there to judge him. I was there to document him.

I asked him again if he thought Bundy was a monster. He dodged, talking about love and understanding.

Gay escorted me out the door and showed me around a couple of raised planter beds he took care of. Behind them were peanuts for the many birds paying visits.

As I got into my car, Gay knocked on the window.