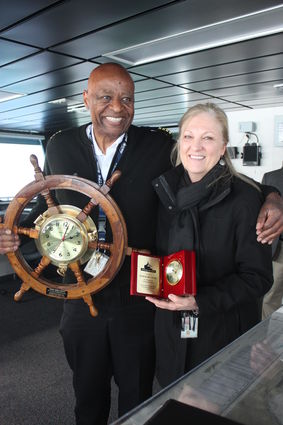 John Shellman received an award for 45 years of service with Washington State Ferries, while Edmonds dock supervisor Deborah Young was honored for 30 years.

On a recent sunny day on board the Chimacum ferry  temporarily subbing on the Edmonds-Kingston route  John Shellman did what he’s done thousands of times: safely docked a Washington State ferry.

Shellman, 65, is a relief captain who has worked for Washington State Ferries 45 years. On this trip, several WSF officials, including Director of Marine Operations Greg Faust, were on board to present Spellman with a gift for his service  a ferry steering wheel.

As Shellman accepted the wheel, he thanked those present.

“It’s been a great experience,” he said in the wheelhouse, over the engine’s constant rattle.

Asking Shellman what his favorite route has been is a bit like asking a parent who their favorite child is. But he did admit he enjoyed Edmonds-Kingston (naturally), the San Juans and Seattle-Bremerton.

What does he like about his job, which he says he’ll do for another year or two?

“The people. Going from point A to point B. And, of course, the scenery.”

Point A to point B is mostly smooth sailing, but Shellman recalled one particularly rough trip.

“It was in the San Juans,” he said. “Going across Rosario Strait in the wintertime with 50 mph winds, on the Elwha. You get a challenge there.”

Another time, on the Spokane, 60- to 70-knot winds rocked the boat, and a wave completely engulfed it.

“My new mate’s eyes just got bigger,” Shellman said with a hearty laugh.

Also honored on this particular trip was Deborah Young, a terminal supervisor in Edmonds with 30 years of service.