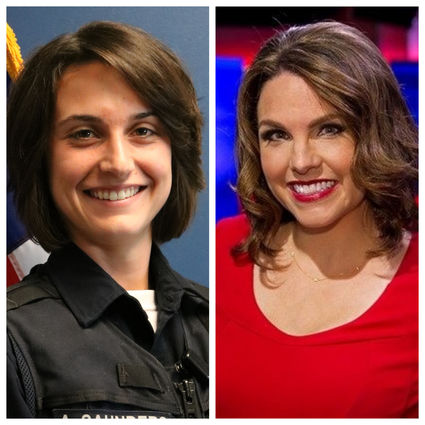 “Though we go through training in academy about these cases, it is something all its own investigating one for the first time as a solo officer on the road,” said Saunders, who joined the department in March 2017.

“The emotions that accompany your interaction with the victim, in addition to the required tasks of the investigation, can be a moving experience.”

Saunders will share some of her experiences in a free community event she organized called “Surviving Sexual Assault: An Evening of Education and Awareness.” It’s 5:30-9 p.m. Wednesday, March 27, at Westgate Chapel in Edmonds.

The event, originally scheduled last August, will be hosted by Amity Addrisi of KING 5 News. There will be a six-member panel discussion about sexual assaults in our communities. A Q&A session will be included with the panel members as well as educational opportunities on the topic.

“As the victim during (my first sexual assault) case described her hesitation for reporting,” Saunders said, “she explained that she was not sure if there were a certain number of reported sexual abuse incidents committed by an establishment or individual that had to be reached before investigators could do anything.”

Saunders said she hopes the event will provide more education and awareness to the community, and those involved in sexual assault investigations, about the realities of these cases.

“By bringing law enforcement officials, medical professionals, survivors, and other participants together, it will be a night of immense support and inspiration, bringing together unique perspectives on such a complex and personal topic in one place,” she said.

Addrisi came to Saunders’ attention through Sgt. Josh McClure, who told her about Addrisi’s special KING 5 newscast where she shared her own survival story of sexual abuse.

“After watching the newscast, I knew that there was no better person to be the guide through this event to show the strength and courage of those who have survived such incidents,” Saunders said.

Throughout her young career in law enforcement Saunders said she’s learned a lot about her profession  and herself.

“The job calls for long hours, opposite schedules, and is emotionally and physically taxing on yourself and the ones you love. But it can also offer a window into some of the most beautiful and breathtaking parts of life and humanity.

“This event embodies one of the many reasons I love my job, the department I am a part of, and my new home. The opportunity granted to do more and extensive support expressed already has been overwhelming, and I could not think of a better place to be.”

”Surviving Sexual Assault” is sponsored in part by the Edmonds Police Foundation. A meet-and-greet with panel members from Providence Hospital, Dawson Place and Edmonds PD is scheduled after a Q&A. There will also be an opportunity to learn personal safety tips and tactics from Edmonds Police officers.