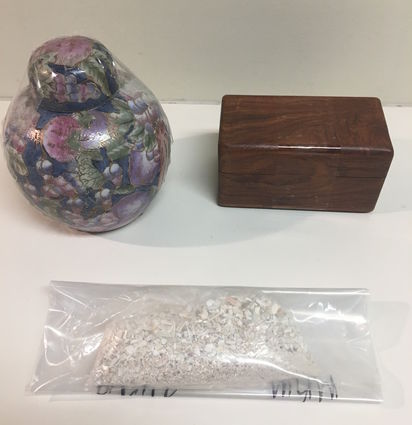 Ashes have been left at Goodwill in Edmonds three times in the past year, according to Edmonds police.

Over the last year, the Goodwill store on Edmonds Way has received what appear to be ashes in its drop-off location bins.

On the last occasion, Goodwill turned the ashes over the police.

“From the pictures, you can see we have three separate collections,” Hawley said. “Two of them are smaller amounts, one in a plastic bag and the other in a small wooden box. We also have one larger urn. It is decorated, and might be recognizable to someone.”

Based on the amount of the two smaller collections, Hawley said he’s not sure if they are human or animal remains.

Although common sense would dictate people not turn human or animal ashes to thrift stores, Hawley said there could be an explanation for the drop offs.

“These might be cases where they came in after someone was cleaning out a loved one’s home and they didn’t realize what they were or maybe in the bottom of a box of stuff,” said. “We don’t know.”

“We would not encourage people to donate ashes to Goodwill,” she said. “We suspect that most of the time people do not realize that they are donating ashes, and that it is part of a larger donation. It is usually up to the family to decide what to do with the ashes of the deceased.

“We historically do not get questions about donating ashes and think most of the time it is in error.”

Those who think the ashes may have been stolen or that they belong to them can contact Edmonds police.