2 new 'On the Fence' art installations in Edmonds 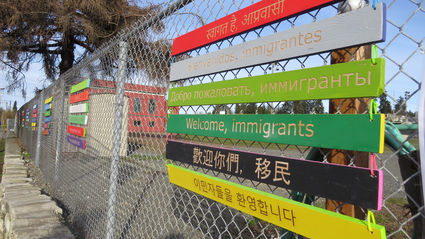 Through April, “Almost Gone, But Not Forgotten” by Angie Hinojos Yusuf is on exhibit on the Main Street fence at the Frances Anderson Playfield.

In addition, “Welcome, Immigrants” by Elise Koncsek is exhibited on the Civic Park fence along Sixth Avenue North, across from the fire station.

Woodinville artist Angie Hinojos Yusuf started her professional life as an architect. She is interested in form, function, color and shape, and how these elements combine in the natural world. She strives to express the juxtaposition of the world we build with a duty to protect the natural world.

“Almost Gone, But Not Forgotten” features a variety of animals native to the Washington coast that are now listed on an endangered or threatened species list. Yusuf said she hopes to peak viewers’ curiosity about the animals exhibited in order to inspire viewers to learn about each animal’s particular circumstance.

“I believe that when we know more about something, we connect with it, and we are then more likely to care about it and take positive action in protecting the environment,” she said.

For more information about the artist, go to mutinybaystudios.weebly.com. 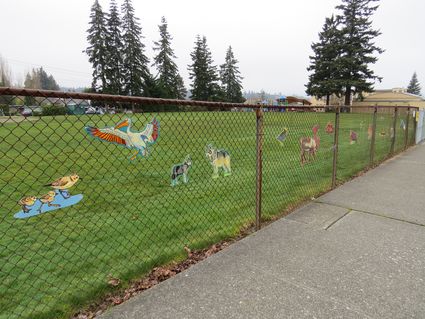 Almost Gone, But Not Forgotten, by Angie Hinojos Yusuf, is on the Main Street side of the Frances Anderson Center fence.

Each line of the poem, which can be read backward and forward, appears in groups of six languages: English, Spanish, Chinese, Hindi, Russian and Korean.

Regarding the inspiration for the piece, Koncsek notes that she chose these languages because they represent both well-established and new immigrant populations in our area. For more information about the artist, go to: Koncsek.com/public-art.

Information about the “On the Fence” program can be found at edmondsartscommission.org.