In Edmonds: A story as large as the universe itself 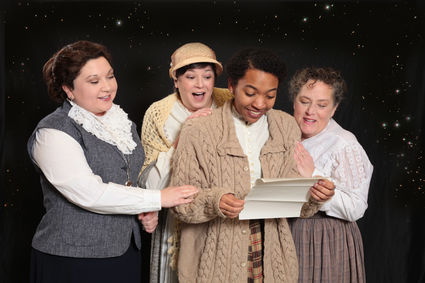 The story follows Henrietta (Marena Kleinpeter), a mathematically astute, star-crazed young woman from the farms of Wisconsin who is offered a job at the Harvard Observatory in Boston. Her sister Margaret (Annie St. John) wants Henrietta to get her head out of the clouds and live a traditional life in rural Wisconsin.

This means attending their father’s church, getting married, and raising a family.

Henrietta, though, can’t be held back from her astronomical passions. So she takes the job at Harvard, only to find herself working as a human computer with two other women analyzing pictures taken from the Great Refractor telescope off-limits to female employees.

Even without the telescope, Henrietta quickly stands out as an outstanding astronomer.

Dan Ruiz Salvatura returns to Driftwood as Peter. He plays an assistant to the head of the department who oversees the women by making his daily rounds and giving them glass photographs of stars to analyze.

While trying to remain confident as the strong male leader, he becomes vulnerable and insecure as he notices that the women, and especially Henrietta, are as equal or better than he is at science.

The performances in this production were strong all around. I wondered how a cast of five people would be able to tell a story that is both historically significant and as large as the universe itself.

But under the skilled veteran direction of Eric Bischoff and technical direction of Rick Wright, the cast was well utilized.

I was uniquely impressed with the lighting design of Gwyn Skone, as he literally put the show among the stars. On one occasion, the audience gasped with amazement at a sequence of special effects.

This story is one of movement through time and space. The theme of movement is layered throughout “Silent Sky.”

Characters grow older, they come together and then separate, cultural norms change, and the universe itself becomes much larger as the play progresses.

I’m particularly attracted to stories that take place over time, where characters that at first seem off-putting in the end become more likable because the audience has a better understanding of their whole character.

“Silent Sky” is important because it highlights the scientific achievement of women who have mainly been ignored throughout history. In particular, it highlights Henrietta, who made significant contributions to the understanding that the universe is much bigger than anyone ever could have imagined.

The play encourages the audience to expand their horizons and see just how big the world really is. It succeeds.