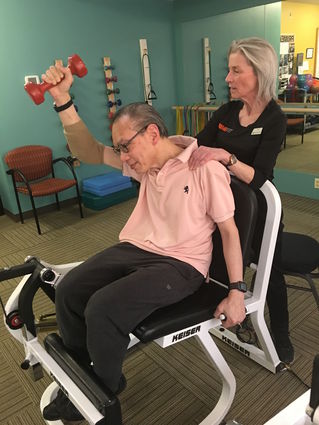 Brighton Court fitness instructor Jo Murphy works with Barney Chiu in the PrimeFit Gym where Chiu and other residents permit neither age nor infirmity from preventing them to lead full, interesting lives.

A group of residents at Fairwinds Brighton Court are on their way to Hawaii. None are going by plane or boat. Some will walk, bike, swim or otherwise exercise their way to the islands.

How’s that again, you wonder? They’re celebrating February Fitness Frenzy, a month-long program to help residents keep fit while raising funds for a good cause. By exercising daily, participants earn miles. Fifteen minutes, for example, will earn you 50 miles, while 45 minutes will rack up 150 miles.

The goal  Hawaii  is 2,694 miles of exercise by the end of the month. Participants in the fifth annual Frenzy also are raising money through their workouts, with funds going to the One Eighty Foundation, a nonprofit that provides grants that positively impact the lives of children and their families in the community. (One Eighty Foundation is the philanthropic arm of One Eighty, the parent company of Leisure Care, which operates Brighton Court.)

Fitness instructor Jo Murphy says the Frenzy is a Fairwinds favorite. Residents, as well as staff, flock to the fitness room daily. Neither age nor infirmity stops them. They can choose their favorite activities to earn their miles, including walking, swimming, Wii, dancing, yoga, biking, hiking and more.

“The purpose, of course, is to motivate them  and have fun,” Murphy says. “The yoga classes are packed. It’s one of the favorites.

At the end of the month, prizes will be awarded to those who accumulated the most miles, and a luau will be held for all the participants.

Among the most inspirational of the participants is Barney Chiu. A former artist and ballroom dance studio owner, Chiu was diagnosed with Parkinson’s disease in 2004. Diminished dexterity in the hand forced him to stop drawing, but he kept on dancing.

But then, in 2012, Chiu suffered another setback  Mitochondrial Myopathy, a muscular disease caused by a genetic mutation. It attacked his back muscles, and he now is bent over, unable to straighten his spine without help.

“From 2004 to 2012 you couldn’t tell I had anything,” Chiu said. Now, however, what Murphy calls “a double whammy”  Parkinson’s and Mitochondrial Myopathy  forces him to use a wheelchair.

But that’s not stopping Barney. He works out twice a week with Murphy, a former ballerina with the San Francisco Ballet Company, to keep up his strength and stretch those tight muscles, and joins in a weekly Parkinson’s class as well.

But what Murphy, other staffers and residents are most impressed with is Chiu’s positive attitude. Rather than focus on what he can’t do, Barney chooses to focus on what he can do. Maintaining as much independence as possible is Job 1. Originally from Hong Kong, Chiu came to the Northwest to attend the University of Washington in 1967. He is known for his sense of humor, his graciousness, and his refusal to give up. “He’s an inspiration,” Murphy says. “I’ve been here 4 ½ years, and there are some residents I’ve never even met.

“But not Barney. Quitting is not an option for him.”

His can-do attitude earned him Athlete of the Month honors recently. Any senior who wants to maintain an active lifestyle, enjoys challenges and is ready for new adventures is encouraged to visit Brighton Court.

Located in Lynnwood, it has 182 apartments, including studios, one- and two- bedroom units, for both independent residents and those needing some assistance. Dinner is included in your rent. Chefs prepare fresh, seasonal menus designed to appeal to every taste bud.

There also is a bistro where residents can enjoy egg sandwiches or other fare in the mornings and, of course, beer and wine during the afternoon happy hour.

For those residents who no longer drive, a bus and SUV are available for trips to the store, doctor appointments and other chores. A concierge helps schedule trips downtown or to the airport.

Daily activities are so plentiful they can fill even the most discriminating resident’s social calendar. Yoga, brunch, cooking classes, barbecues, wine tast- ings, chocolate tours, art shows, sporting events, concerts, movie nights  the list goes on and on. Come the end of February, there will even be a luau. Barney will no doubt be there. He’ll be the one with the mai tai.